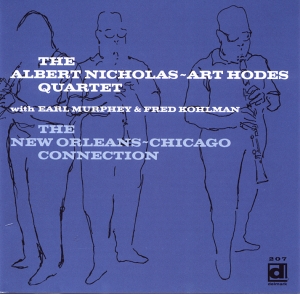 Legendary pianist Art Hodes was on the jazz scene since the late 20s, working with such stalwarts as Sidney Bechet, Frank Teschemaker, George Brunis and many more. Over the decades he recorded for numerous labels including many successful sides with clarinetist Albert Nicholas for Blue Note in the ’40s. Nicholas played with King Oliver and Jelly Roll Morton in the late ’20s, Louis Armstrong and Chick Webb in the ’30s, and was a major figure in the traditional jazz revival in New York in the ’40s. This 1959 session also features the rhythm section of Earl Murphy on bass and Fred Kohlman on drums.