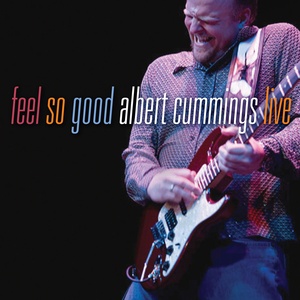 Dynamics, tone and performer/audience togetherness overpower volume and attitude every time. Anyone who’s graduated from rock to blues knows that, but when an artist can capture the dynamics of both styles in live concert, it’s time to find a new word to supersede “crossover.” On his live Blind Pig CD Feel So Good, Albert Cummings doesn’t go over the top, he slices cleanly through it. He flies above the bridge between the two genres of rock and blues. This “vehicle” never touches the road long enough to leave skid marks. This show was recorded in Pittsfield, Massachusetts in the Colonial Theater, a 95-year-old “little jewel box” – that’s what James Taylor calls it – that’s hosted everyone from Will Rogers to Al Jolson.

On this CD, you’re eighth row center for the show where the beer sold out before the music even started. At the controls is Jim Gaines who produced the last two Cummings CDs, not to mention albums by Carlos Santana, Buddy Guy, Steve Miller and Tommy Castro among many others. “It’s the comfort zone. I just know if Jim Gaines is gonna be running the controls, I don’t have to worry about that stuff. You know, if you’re thinking,’ you’re stinkin,’ “ says Cummings.

Cummings is the antithesis of Gary Cooper in “High Noon.” Remember the story where Coop as sheriff can’t get a single deputy to help him face off the gang as the fated hour approaches? Cummings’ “High Noon” was Saturday night, March 15th, 2008 at 8 p.m. Every one in that audience was on his team. The band merged with the sold out throng, and the whistling, cheering, singing crowd became a driving element of the band. The space between the seats and stage disappeared and everyone flew above the balcony.

It wasn’t Albert Cummings on stage that night. It was “The Other Guy,” his alter ego. “We joke about the multiple personalities,” says Cummings, “but I truly believe I have it. ‘Albert’ will walk out on that stage, and then he’ll leave. ‘The Other Guy’ will kick him off and say, ‘Get the hell out of here ’cause now it’s my turn.’ Once I hand it over to him, I got no control. So, he just does his thing, and I just sit there and watch.”

Cummings works and plays “Rock Me Baby” and “Rock and Roll,” but these aren’t your grandfather’s B. B. King or your daddy’s Led Zeppelin respectively. Rather, they’re anthems, part of the wild ride of a live CD that whisks you through the repertoire of a blues man who destroys every cliché of either the blues or rock genre.

“Barrelhouse Blues” co-written by Chris Layton and Tommy Shannon of Double Trouble originally appeared on Cummings’ first CD From The Heart which was co-produced by Stevie Ray Vaughan’s rhythm section. Here he slaps, strokes, squeezes, cajoles, tweaks and ultimately has his way with his Strat.

Dedicated to his wife Christina, “Together As One” shows the smoother side of Cummings with its sweet seductive roll while “Hoochie Coochie Man/Dixie Chicken” leads a charge that turns the lathered crowd into more than bit players in Cummings High Noon scenario. From Muddy Waters to Little Feat without so much as a skip or slip, and we’re all part of the party.

On the original “Sleep” from his Blind Pig debut True to Yourself Cummings seduces the fans with a delicate Flamenco-influenced ballad that slips into a lazy psychedelic delirium cajoled by his distinctive voice emphasizing dynamics that capture the spirit in the line “Go to sleep, my child.” Recorded in one night of hometown bravura and bombast, Feel So Good redefines call and response for the 21st century.

It all may haves started when Albert saw Stevie Ray Vaughan in Boston, and decided there was something more to life than simply taking over as the fourth generation head of the family construction business. “The Other Guy” emerged the first time he opened for B.B King.

In 1998 he walked into a Northeast Blues Society open jam one Sunday night and announced that he and Swamp Yankee, his fledgling band from Williamstown, Massachusetts, were going to play some souped up blues. That jam led to Cummings’ winning the Society’s Colossal Contenders contest, and he journeyed to Beale Street to compete in the Blues Foundation’s 1999 International Blues Challenge. That relationship also opened up an opportunity for him to work with Tommy Shannon, Reese Winans and Chris Layton of Double Trouble.

The Society brought the four together in 2000 for Communiversity Day at Rensselaer Polytechnic Institute. That began a relationship that has included touring together, co-producing From The Heart as well as Tommy Shannon’s appearance on his Blind Pig debut, True To Yourself along with Austin session kingpins Riley Osborne on keyboards and B. E. Frosty Smith on drums. Produced by Jim Gaines, the CD garnered enthusiastic reviews and was well received by new fans and old fans alike.

Albert’s second Blind Pig release, Working Man, another Jim Gaines production, opened with Merle Haggard’s “Workin’ Man Blues,” a reference to his ”Other Guy” role as a builder. About that album Cummings told BluesWax, “I’m starting to realize how my voice is my instrument. I used to hide behind the guitar more and use the voice as the secondary, but now it’s rivaling the guitar.”

Today, The “Other Guy” competes for time with Albert The Builder. During the day, Cummings builds multi-million dollar homes that have made him the talk of builders around the country and have been featured on numerous trade magazine covers. Cummings finds his construction work helps him relate to his fans. “I’ll go somewhere where nobody knows me. They think I’m some great super human that can play the guitar and sing. They realize, “No, he’s not. He’s a builder, man. He’s like a regular guy. He’s like the guy you meet at the coffee shop and hang out with. And that’s the thing.”
21
What's This
Advertisement