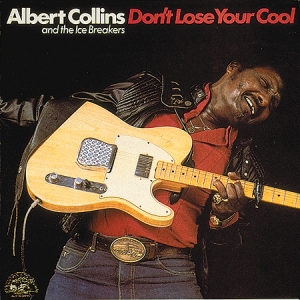 No one plays blues guitar quite like Albert Collins. He's a breed apart. It's not only his incredible, express-train energy, though Musician magazine calls him "the most powerful blues guitarist in the world." It's not just his icy tone and shattering echo, the "Cool Sound" that has been his trademark since his earliest hit singles twenty years ago. Nor is it simply his weird, minor-key tuning, with a capo clamped halfway up the neck of his Fender Telecaster, injecting notes unheard-of in the time-honored blues progressions. It's not only his searing, flesh-on string attack (he never uses a pick). It's the way he fuses all these together with his unpredictable, electrifying spontaneity. Watch him on the bandstand -- at any moment, his patented percussive riffing gives way to the tension of a single-note solo, solong and pure it defies belief. And just when it seems he's held that note twice as long as humanly possible, he shatters it with a flurry of jabs so piercing they could slice sheet metal. Then, without warning, he cuts his volume and squeezes out a shimmering, melodic line that leaves his audience breathless.

Albert sings in a sly, drawling voice with a natural storyteller's ability to get deep inside a song. His lyrics are as contemporary as yesterday's hangover or tomorrow's bills.

And in the recording studio, Albert delivers just like on the bandstand -- hard, fast, steaming like dry ice.

Albert honed his icy-hot style in years of night-after-night gigging in Texas honky-tonks, jamming with the likes of T-BoneWalker, Gatemouth Brown and Johnny "Guitar" Watson. He cut his first hit singles in Houston, instrumentals like ”Frosty,” “The Freeze” and “Defrost.”. When he moved to California in the mid-60's, his screaming, high energy blues made him a natural for the rock circuit, and he played regularly at the Fillmore and other rock palaces, billed with Canned Heat, The J. Geils Band, Janis Joplin, Johnny Winter and Jimi Hendrix (who idolized Albert). He cut albums for the Imperial and Tumbleweed labels, but his fame was based on those amazing live performances.

Since signing with Alligator in 1978, Albert and his crack touring band, The Icebreakers, have carried the Cool Sound literally around the world. They've played festivals, clubs and concert halls from Athens to Oslo, from New York to Tokyo. They've won every award the blues has to offer, and earned the adulation of a whole new generation of young blues-rockers, like George Thorogood and The Fabulous Thunderbirds.

For this album, The Icebreakers are joined by Chris Foreman, a young organ player who really swings those driving Texas shuffles. Chris' great shuffle playing inspired Albert to cut the super-hot “Don't Lose Your Cool” (a new version of one of his hit singles from the Texas years), and “Quicksand,” written by one of his boyhood idols, Guitar Slim. Albert pays tribute to a couple of his other heroes, too. Big Walter Price, the Houston piano man, wrote “Get To Gettin'” (Albert played guitar on the original 45), and the legendary Percy Mayfield one of Albert's favorite singers, composed the haunting “My Mind Is Trying To Leave Me.”

If you've ever seen one of Albert Collins and the Icebreakers' power-packed live performances, you know what they can deliver. Here they are, ready to put "the freeze" on you right in your living room. But be careful -- you may lose your cool permanently.