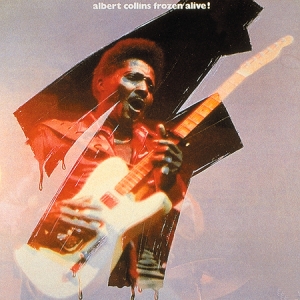 There has never been and may never be again a bluesman quite like Albert Collins. "The Master Of The Telecaster" was born on October 1, 1932, in Leona, Texas. A cousin of the legendary Lightnin' Hopkins, Collins emerged with a blues sound and style all his own, featuring a combination of icy echo, shattering, ringing, sustained high notes, an ultra-percussive right-hand attack, and an unheard-of minor key guitar tuning (taught to him by his cousin Willow Young). Deeply influenced by T-Bone Walker, John Lee Hooker and Gatemouth Brown, Collins absorbed the sounds of Mississippi, Chicago, and especially Texas. He formed his own band in 1952, packing clubs around Houston. In the early 1960s, Collins' "cool sound" instrumentals like the million-seller “Frosty” (recorded with a young Johnny Winter and Janis Joplin in attendance at the studio) and follow-ups ”Sno Cone” and ”Thaw Out” were all over R&B radio. Soon he was sharing stages with his idols Gatemouth Brown and T-Bone Walker.