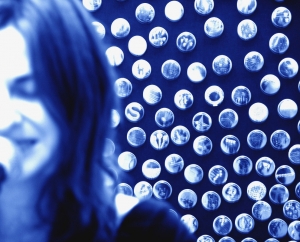 "In the mirror", considered one of 2003s best albums by the Spanish media, was Ainara LeGardons solo debut, featuring Chris Eckman (The Walkabouts) on production duties and, among other guest musicians, Joe Skyward (Posies, Sunny Day Real Estate, The Walkabouts) on bass. It was released in Spain by Winslow Lab and distributed by Dock. Summer of 2004 saw the re-release of this record focused on the international market.

After extensive touring all over Spain (where she opened for Thalia Zedek, Tara Jane ONeil, Dayna Kurtz, Chris Eckman and Karate), and also in France, Germany (supporting The Walkabouts), Belgium and Holland, her second album, "Each day a lie", was released past April.

Also produced by Chris Eckman, it was recorded at Estudio Brazil in Madrid (Feb-March 2005). Guest musicians include several artists from the Spanish independent scene, and Al DeLoner from the acclaimed Norwegian band Midnight Choir.

The first part of the tour consisted in 30 shows all over Spain, including opening acts for Bonnie Prince Billy & Matt Sweeney and Giant Sand.

Last March, Ainara played five shows in NYC, including a performance at CBGBs and a showcase at Vox Pop with guitarist Jason Victor (Steve Wynn & The Miracle Three, Willard Grant Conspiracy). This year she also played two of the most important festivals in Spain: Primavera Sound and Benicassim International Festival.

Born in Bilbao (Basque Country) in 1976, Ainara LeGardon was vocalist and guitarist of the Spanish rock band Onion from 1994 to 2003. With Onion, she released three records and saw her songs being included in several acclaimed films such as the worldwide known "Abre Los Ojos" ("Open Your Eyes") by Alejandro Amenbar.

In 2003, Ainara started her own label, Winslow Lab, and co-founded Famelia: a Madrid-based association of self-released bands, indie labels and a recording studio. Famelia supports the independent scene by putting on shows and tours, distributing numerous artists and contributing to seminars on the music industry and the "DIY" philosophy.

Ainaras songs have been included in more than a dozen compilations, including "Borderdreams, La Ruta del Americana" (Dock, 2004), a double CD in which she is the only non-American musician among artists such as Townes van Zandt, Jay Farrar, Mark Eitzel, Friends of Dean Martinez, Centro-Matic, 16 Horsepower, etc