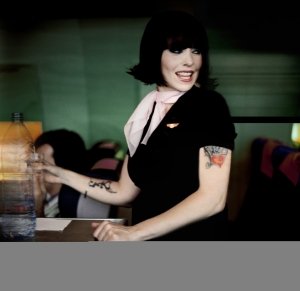 Bio: Adrian Bromley
Agua de Annique's music captures the solace and beauty of life, told through a wondrous backdrop of musical arrangements and emotionally-drenched lyrics.
After deciding to part ways with renowned Dutch rock band The Gathering early this year, charismatic singer Anneke van Giersbergen formed the alternative rock/pop band to allow herself to venture out and voice her solo material and personal lyrics.
Van Giersbergen who also plays piano on the rock/pop-influenced album, wrote all of the music and lyrics, except the song 'Sunken Soldiers' by friend/musician Kristin Fjellseth and 'Come Wander with Me' by Jeff Alexander (from the 60s TV series The Twilight Zone).
The debut album 'Air,' due out October 26th of 2007, was recorded at various studios in Holland (Waterfront and The Void), as well as in the comforts of the singer's home studio.
The band is rounded out by Joris Dirks (guitars/vocals), Jacques de Haard (bass) and Rob Snijders (drums) Additional musicians involved on the debut album include: Kristin Fjellseth providing additional vocals, Heleen de Witte on the flute, trumpet work from Tim Conroy and Jeffrey Fayman's string arrangements for "Ice Water." The album was mixed by Jon Anders Narum.
The first time the music world noticed van Giersbergen was when she joined The Gathering, a doom metal band from the Netherlands that were in the process of shifting their style and no doubt changing the music scene from that point onward. Her beautiful vocal melodies atop the band's powerful guitar tones and stellar drive created a unique sound of female-fronted metal that would go onto inspire many bands years later.
Her 13 years in the band (1994-2007) were definitely a busy one, as she and the band put out eight studio albums and toured the world several times over, their sound and style constantly evolving. Anneke won a 'Devil' award in 2005 for Best Singer from the Dutch National Institute of Pop, while the band won several awards over the years too, including the Dutch 'Edison' award for the DVD 'A Sound Relief', as well as 2007's Live XS awards for 'Best live band in Holland' 2007 and 'Outstanding achievement' award 2007.'
Now with Agua de Annique, van Giersbergen heads into new territory as a solo singer/songwriter, a challenge she's willing to face as her emotions guide her effortlessly through each musical arrangement and beyond…
Agua de Annique is:
Anneke van Giersbergen; vocals/piano
Joris Dirks; guitars/vocals
Jacques de Haard; bass
Rob Snijders; drums