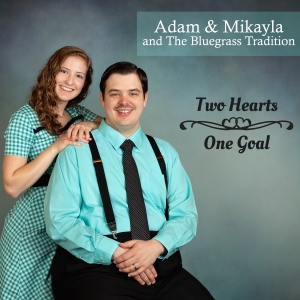 It was Cabin Fever Pickin Party, March 2018. As Adam walked into the Vendor's area, he heard a bass playing. He turned to see who it could be, and when he saw Mikayla, cupids arrow struck home. They would not actually meet until later that day. Mikayla heard someone playing "Fire On The Mountain" on the fiddle. Curious, she searched until she found the person playing, and it was Adam. They talked and picked some together off and on the rest of the weekend. After returning home, Adam could not get her off of his mind, and so he reached out to Mikayla on Facebook. As they talked more and more, they fast became best friends. Adam knew this was the woman he wanted to spend his life with, but Mikayla at first was not smitten. Adam remained persistent, and in October of 2018 cupids arrow struck again and Mikayla fell in love with the fiddle man. The following summer, having asked her dad for her hand in marriage, Adam proposed. Mikayla accepted, and they were wed in November 2019.

Sharing their common goal to have a band, they formed Adam & Mikayla and The Bluegrass Tradition. Together, they are determined to play the traditional bluegrass they both love, to play as the founding fathers played, and to bring the best music to the fans of the tradional sound.

Adam started his professional journey at the tender age of 18, with the Lonesome Will Mullins Band, playing the bass. Adam traveled up and down the east coast for a year and a half, learning every step of the way.

Being a multi-instrumentalist, Adam joined The Kevin Prater Band in 2016 on fiddle. Now traveling east and west coasts, Adam was able to hone his talents even further. He was meeting, talking, and learning from more and more folks, all the while making a name for himself as an entertainer. Adam has been given the title “The Dancing Fiddler” because he can’t hold back his feelings
for this music he loves and will dance.

Adam's love and respect for the first generation and traditional music has brought him to this next journey in his life. To start his own band is a dream come true.

Adam's goal is to follow in the footsteps of his friends; Carolina Blue, Po Ramblin Boys, Big Country Bluegrass, and all the other great bands playing the tradtional music.

Mikayla comes from a family with deep roots in bluegrass music. Her grandfather, Bob Green, played with Tidewater Grass in the 1970's. Mikayla's father, Sam Hyde; her brothers, Caleb and Isaac Hyde; and her uncle, Robert Green, all play in the highly popular bluegrass gospel group Solid Rock. With such a rich history of bluegrass in her family, it was her destiny to play music.

Mikayla's weapon of choice is the upright bass, and what a command she has of that instrument! With impeccable timing, she pulls a tone that is rich and full and has the taste of a seasoned player.

Mikayla's interest in music is varied. She not only loves bluegrass, but also swing, jazz, and big band, and she draws from all of these in her playing style. And when it comes to singing, Mikayla can do that too! From lead to harmony, you can hear her influences...Patsy Cline, Helen Forrest, and Jimmy Martin to name a few.

Mikayla is excited to stand beside Adam and bring to the stage "Adam & Mikayla and The Bluegrass Tradition" for your enjoyment.