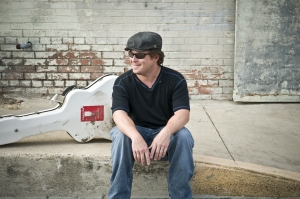 A Texas Songwriter born and raised, Adam Carroll takes the events of ordinary lives and turns them into deeply moving, often humorous songs.

With seven Indie CDs supporting regular tours across the USA, Canada and Europe as “one of the hippest songwriters on the Texas music landscape”, this engaging Americana guitar-picker has earned further critical acclaim with song placements in the Grammy nominated film, Country Strong and others.

“The core of what I do is songwriting; it’s the one thing I’m passionate about. It’s the most fulfilling and challenging job I can imagine.” explains Adam.

From his studio records produced by Grammy Award winner Lloyd Maines (South of Town, Lookin’ Out the Screen Door, Live at Cheatham Street, Far Away Blues) through to his latest releases (Old Town Rock N Roll, Hard Times with Michael O’Connor, Live at Flipnotics), the quality of his songwriting stands out.

Given a rare command of the English language and an amazing sense of melody, it’s little surprise Adam has earned enviable comparisons to Townes Van Zandt, Todd Snider, John Prine and Bob Dylan as well as being recognized as a creative influence on his songwriter peers.

“Among singer-songwriters, Adam Carroll is probably Austin’s best-kept secret. His tunes are marvels of economy; .. constantly inventive and decidedly offbeat .. Live at Flipnotics offers a typically low-key yet inviting overview of his career. With (Producer) Scrappy Jud Newcomb on guitar, he sparkles .. ” Jim Caligiuri, Austin Chronicle

“Influences ? .. Adam Carroll .. I used to skip my own gigs to go watch him .. by far my favorite, somebody whose writing style I emulated in some ways.” Hayes Carll, No Depression 2011
12
What's This
Advertisement