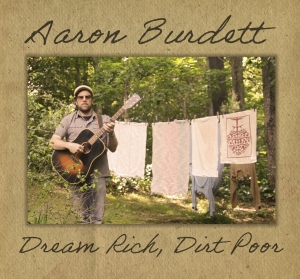 It’s been a long, hard road to success for North Carolina songwriter Aaron Burdett. Although he has an extensive catalog of critically-acclaimed recordings — not to mention his share of national songwriting competition honors — it took the recent success of his bluegrass-flavored “Rockefeller,” which climbed the charts and lingered there for most of 2020, to repay his persistence and make him a new discovery for roots music fans. That first single from Burdett’s newest, Dream Rich, Dirt Poor, was followed by a string of successful singles, including “Dirt Poor” and “Loser’s Bracket,” both of which topped Bluegrass Today’s Grassicana chart and garnered months of play on SiriusXM’s Bluegrass Junction. The singles have been featured in national editorial outlets, including The Bluegrass Situation, Hallels, Country Music News International and Laurel of Asheville.

Joined by the members of his regular trio, mandolinist Daniel Ullom and bassist/vocalist Kim France, and a short list of sparingly used studio musicians and guests, including multi-instrumentalist David Johnson, fiddler Carley Arrowood and Larry Stephenson Band banjo player Derek Vaden, Burdett has created an album that sits squarely at the increasingly popular intersection of bluegrass, folk and progressive roots music. Dream Rich, Dirt Poor marks Burdett’s return to his North Carolina mountain roots in style and subject matter, its gritty themes and hard-earned authenticity revealing tough (and sometimes ironically humorous) truths about the lives of hardworking people — not only through those hits, but through the compilation’s additional new songs like “Hard Hand,” “Working Class” and “Too Far From Home.”

“Dream Rich, Dirt Poor, like every album I've released so far, is a collection of songs plucked from the preceding few years,” Burdett notes. “I am not sure how songs happen or why they materialize when they do, or why most get left behind unfinished but some get completed and recorded. I try not to worry too much about it. All I can do is look back when an album is released and try to find correlations. I do know that a few years back, my family and I were going through some tough times. We were in financial trouble and had a young child in the house and it was just one stressful thing after another. Fast forward a couple of years and we're doing much better, but that time frame was an experience I won't ever forget. I believe the language and themes from this set of songs flowed from what I was working through at that time. I knew we would get through it, and having a family to rely on was, and still is, huge. I know I won't realize the full lessons from that period until later, but I've gleaned a lot.”

Though he’s no stranger to acoustic music, this compilation reveals Aaron Burdett’s renewed appreciation for the beauty and power of unadorned wood and wire. The result adds further dimensions and depth to an artistry that had already given insiders reason to connect his name to sharp, detailed observation served up with an unselfconsciously literary flair.

“These songs help me process, they help me vent, they help me sort out my feelings when I don't know how to do it any other way,” Burdett concludes. “I'm grateful to have that option, and I'm sure it's why I play and write in the first place. I hope people enjoy these songs and get half as much benefit out of them as I did.”