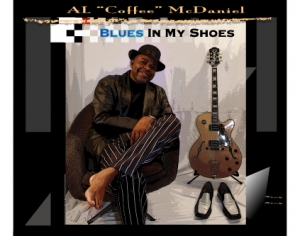 Tampa--July 23, 2007. Al "Coffee" McDaniel may be a new voice to the Blues, but he is not new to the world of music. He has been performing professionally since he was five years old. It was then that he fronted a gospel band. Granted this band was comprised of siblings, but he knew even then what course his life would take, and the direction he would pursue.
July 29th CPA Records, McDaniel's private label, will release a landmark recording for the Blues. It may very well be the first modern day urban Blues opera. This fourteen track CD, possibly autobiographical, in music and song, tells the story of a man who finds himself married to a woman who is controlling, abusive and unfaithful. He asserts his autonomy from this relationship, meets and falls for another woman who ultimately helps his career, as she helps him attain fame and notoriety.
Al Coffee has successfully accompanied himself on this awesome CD with two of the most recognizable names in the music industry, legendary producer/songwriter/drummer, Narada Michael Walden, and blues great, guitarist/keyboardist/songwriter, Lucky Peterson. With this level of incredible future hall of fame artists joining AL "Coffee" McDaniel on this project, "Blues In My Shoes," it has genuine Grammy awards potential.
This phenomenal CD, which will be nationally distributed, includes songs ranging from traditional Blues, to Chicago and Texas blues, mixed in with a nice touch of R&B. While he paints each track with a different tint and hue from the Blues pallet, he defines each track with lyrics that paint a picture as though he were a fine artist. Each track, solid enough to stand on its own, comprises another act and scene that unfolds as it is listened to and considered as a whole. McDaniel's portrayal of the night club entertainer bedeviled by the woman to whom he is married, a woman who would possess him and destroy him, is particularly poignant.
This opus, storyline, lyrics and musical arrangements was conceived and composed by Al "Coffee" McDaniels.


Blues In My Shoes: A Modern Day Urban Blues Opera in 14 Tracks


Storyline synopsis: Women aren't the only victims of domestic abuse. Daily men are victimized by the women in their lives. These cases of domestic abuse go largely unreported.
In this story Al McDaniel plays the part of a night club entertainer who finds himself married to a woman who is abusive, controlling and unfaithful. She is resentful and demeaning of Al's profession.
This story is a poignant portrayal of a man married to such a woman, until he meets the woman of his dreams, someone who ultimately helps him in his career attain fame and notoriety.

Track 1/ Scene 1/ Act 1. Just Tryin' To Be Me. As this story opens, Al's wife Leche has flown into a rage, tearing up the house, throwing things at Al demeaning his profession, demanding that he give up. He sings this song, the opera's opening, just as he leaves the house and enters the streets.

Track 2/ Scene 2. Blues In My Shoes. Al is not scheduled to work. However, when he enters the club, many of his regulars, surprised by his arrival, call out him to perform something for them He sings and dances this number.

Track 3/ Coffee is present in the audience and taken by Al's performance, she approaches management and asks for an introduction. Management takes her to be a star struck fan, and sensing no harm in doing so, introduces her. Her friends think it odd that she does this, and so does Al's friends. Al senses immediately an attraction to this woman, a connection and performs this number.

Track 4. A Shoutout. Unaware of where Al is, knowing that he was not scheduled to work. his wife- Leche arrives at the club with a male friend. She sees and Coffee talking at a table, and flies into a rage. She creates a scene disturbing the club's patrons. She is subdued and restrained until the police arrive. She is carted off to jail. Al sings this number as if taunting his wife for the hell she has made of his life.

Track 5. 2 Headed Monster. At the club, Al's friends ask what this was all about. They have never known him to be anything but professional, and never suspecting what he endured at home. He tells them in this number, the only acoustically performed track on this CD.

Track 6. For The DJ. Recognizing that this scene has made Al uncomfortable, the DJ starts up the music. Al steers attention to the DJ and as the patrons of the bar start to dance, Al and Coffee slip out of the club.

Track 7/Act 2/Scene 1. Taxi. The relationship between Al and Coffee develops, maybe too quickly for Al. Trying to protect his feelings, Al has insulated himself. He breaks things off with Coffee and takes a taxi ride to clear his head and to sort things out.

Track 8. Scene 2. Hey Baby. Recognizing he loves her, Al returns to Coffee. He asks he to slow things down.

Track 10. What A Woman Wants. He recognizes that he is prepared to give Coffee everything she wants.

Track 11/ Act 3/ Scene 1. Don't Touch The Dog. Al's wife has filed for divorce. In court she is present with yet another male friend. Al is prepared to give up everything he owns but pleads, " You can have my ex, but don't touch the dog."

Track 12/ Scene 2. Thrill is Gone. As Al leaves the courthouse, he passes his ex- and her male friend. He sings, "The thrill is gone."

Track 14. Finale. Reggae Blues. This song represents the perfect marriage of Reggae--C0ffee is Jamaican--and the Blues--this is Al's background.

Al Coffee McDaniel is a national recording artist, and has released several CDs under his private label, CPA Records. Highly recognized as a premier male vocalist, and a seasoned guitarist, he is an arranger, composer, producer, and a captivating entertainer. No matter where "Coffee" performs, he captures the attention of his audience and fills them with music. While preserving the spirit of the original artists, "Coffee" revives their songs in a personal way, polishing them, enhancing them, customizing them with his own added touches, making each song more beautiful than it's original version. His performances consists of pop, blues, jazz, R & B, standards, mixed in with some of his own music.

McDaniel has become the singing sensation of Clearwater Beach, Florida, performing at the Cabana Grill & Bar (Sand Key) . He has developed a loyal following of locals who enjoy that fine, strong baritone voice, and the visitors love him, too. He has also appeared on several television and radio gospel music programs across the nation in Las Vegas at the MGM Grand Hotel and Casinos; Nashville, Tennessee; Atlanta, Georgia; Raleigh, North Carolina; Washington, DC; New York City, NY; and across the state of Florida.

He has also performed with some of the great artists in the music industry to include, Billy Paul, Gene Chandler, the comedian "Sinbad", Joe Simon, Denise Lasalle, and others. While serving in the United States Air Force, he also performed abroad in Europe, South East Asia, and The Pacific Islands.