A.J. and the Rockin Trio - Rockin The Blues 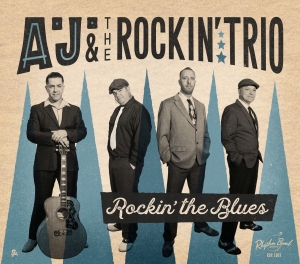 A.J. and the Rockin Trio - Rockin The Blues
It is hard to believe that 3 years have passed since that first jam session in the summer of 2014 at Aloha Café. The little snowball haven’t stop growing, after the 6 track promo cassette, that arrived at Rhythm Bomb headquarters, soon A.J. & the Rockin’ Trio were promoting their first CD at The 20th Rockabilly Rave with gigs scheduled outside their old country Portugal, in the far corner of Western Europe.
A.J. & the Rockin’ Trio is a 4 piece classic Rockabilly combo that plays Authentic Rockabilly with their own mixture of influences like Rhythm & Blues, Country, Western Jazz and Early 60’s Rock’n’Roll, and joins old Rockin’ friends André Joaquim (Vocal / Acoustic Guitar), Celso Ladeira (Lead Guitar), Ruben “El Pavoni” (Upright Bass) and Rui “Tex” Gomes (Drums).
The new CD “Rockin’ The Blues” started taking form immediately after the band landed from the Rave, A.J. wrote Rockabilly Fever from their boppin’ time in U.K. and 9 more original songs, Celso Ladeira brought an old song from his repertoire that the band use to play live, and for the cover version appears “Have a Ball” from The Country Dudes.
For the recording A.J. & the Rockin’ Trio gathered at the old rehearsal warehouse in the old Industrial part of Lisbon, put together some microphones, even made some overdubs, and the result is what your hear, if you listen close you can hear the machinery of the Auto Repair, and you can even listen the old train passing by, the same as the video clip of “Waiting For You” from the previous CD “Howlin’ at the Moon”.
Sharing the same passion for Rockabilly, some of the band’s friends appear to play on the record. Nuno Lopes on the trombone, the childhood friend Piano virtuoso Jaime Oliveira, and two big names from the Rockin’ scene, Pedro Serra from the legendary Tennessee Boys, Mean Devils and TT Syndicate to name a few, and thanks to the modern technology, the Rhythm Bomb Records recording artist Coral Lee Farrow recorded her beautiful voice in Australia on the other side of the world.
So grab a beer, put the volume loud and enjoy as much as A.J. & the Rockin’ Trio enjoyed… Rockin’ the Blues!.


A.J. & the Rockin' Trio is a four-piece Rockabilly combo, with Vocals, Acoustic and Electric Guitar, Upright Bass and Drums.
The 12 track debut CD "Howlin' at the Moon" contains 9 self-penned originals and 3 covers, and will be released trough Rhythm Bomb Records based in Berlin, London and Los Angeles. Playing modern Rockabilly, A.J. & the Rockin Trio bring to their sound flavors of R&B, Swing, Country and Jazz, making their own unique blend and vision of Rockabilly music.
With just 2 years existence, A.J. & the Rockin' Trio has released the debut CD "Howlin' at the Moon" at the biggest european festival, the 20th ROCKABILLY RAVE in UK on June 2016, and in Portugal at the biggest summer festival NOS ALIVE at Raw Coreto Stage on July 7th. During the summer, film the video clip for “Waiting For You”, that reached on the first week at Facebook an impressive 500 shares and 25000 views. In September, “Hot Rockin' Mama” and “She Do The Bop” taken from the CD are released in 7 inch vinyl, the artwork was made by one of the finest vintage artist Henrique San. Still in September A.J. & the Rockin Trio played at Alligator Rockin' in Spain, and for 2017 already have 7 dates appointed for Spain, France and Austria.

July 12th 2014 - Saturday afternoon,
Aloha Café in the now defunct Imaviz Undergound, bring to the classic Jam Session, four old time friends from the Rockabilly scene, A.J. & the Rockin' Trio is officially born. The four-piece combo create the show "Johnny Cash Special & the Rockabilly Favourites", presenting it in the Live Music Bars and Tributes. In 2015 the band record 6 tracks, 4 self-penned and 2 covers, and released the E.P. in Cassette format, and started presenting with their own name. The opening track "Hot Rockin' Mama" make some buzz on the scene, and quickly gets to Rhythm Bomb Records who invites to release their first CD, releasing the song later on vinyl 7''
4
What's This
Advertisement