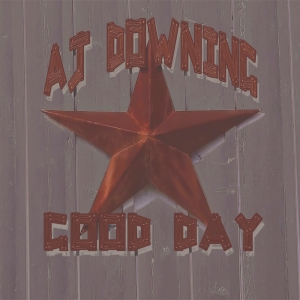 Kent Finlay...Cheatham Street Warehouse
"A.J. Downing reminds me of a modern day Hank or Woody, writing and singing those soulful songs, not so much becausehe wants to, but because he has to . . . because it is his mission in life. When you hear that sincerity in his voice, you know immediately that he is the real deal."

AJ Downing follows up his fine debut, River Of Life, with Way Back Home, a rockin-rollin-redneck kinda record. Don’t read “redneck” the wrong way, though, because I’m using it here to describe a down-home-born-in-the-sticks sound. There are no trite observations of the wonders of drinking beer or the wisdom of calling in sick to work so he can float the river anywhere to be found here. Downing chooses to more often tackle the more serious side of life.

“Chisolm County” simultaneously celebrates and decries simple country life. “Rockin Little Rebel” is a surefire radio hit, if it ever gets targeted that way. And then there’s the whimsical “Facebook Song” about everyone’s favorite social networking website. Downing explores life to the fullest, the highs and the lows, but even when he brings the tempo down, Steve Sarber’s guitars keep things alive, making Way Back Home a fun and entertaining listen all the way through.

Oh, and Weiss’s accordion. It rowdily paces the first song, and is then strategically used throughout the record. Just the way it should be.

Americana Crossroads
A.J. Downings debut album, River of Life, has the sound of those albums that you can easily find yourself kicking back to when your on the road. Between the Dobro, Banjo and occasional railroad beats, River of Life carries a sound that is easily found to be a releasing one. There are very few records that are released in this age that you could label as having a "timeless sound" like The Freewheelin' Bob Dylan, Blue Kentucky Girl from Emmylou Harris but Downings River of Life is one that I say slides right into line with Emmylou and Dylan. A.J. rolls out vocals that strike the chords of Steve Earle and the slick twang of the lead singer Kevin Russell of The Gourds. Lyrically, this album is solid and something new that the Americana music business really needs more of.. Good people making some Boot Knockin' music. Just as the music business needs this album, so do you.