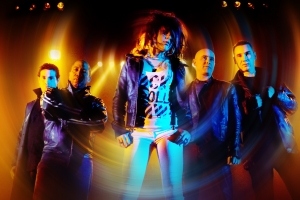 AIOIA is one of the most innovative bands to emerge from France in recent years, and what originally began as an alcohol-fuelled idea by a group of songwriters, composers and scientists has over time become a powerful musical force. The composing and recording of their debut album Ummo Uxa inspired the band to further their musical development and perfect their songwriting skills.

The result is their new album Gaa which was recorded during autumn 2008 at producer Romain Frydman’s studio. It’s the second part of the band’s ‘Alien Songs Trilogy’ and is a major leap forward (especially vocally) that focusses their genre defying rock to metal, classical to ambient sound on songs whose titles give some idea of the content, from ‘Crop Circles’ and ‘Mars Insider’ to the radio friendly ‘The Earth Is Dead’ and ‘A Garden In The Sky’.

AIOIA are multi-instrumentalist Stéphane Sarrazin, singer Kinnie Lane, guitarist Dji, bassist Didier Baude and lyricist Alex Vicq. They raised the recording budget for Gaa on the SellaBand online platform by crowdsourcing from their fans and the public around the world.

The special limited edition features three tracks with featured guest vocalists Natalia Sarfan, Lori Geco and Gisel de Marco - all members of the SellaBand community and artists in their own right.