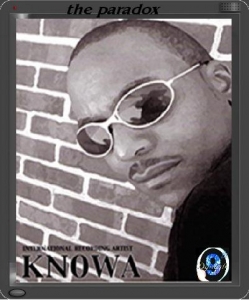 Kemondie focuses on Independent Artist and Bands. Knowa is the creator and executive producer of VA. Underground a show that aired on wb-33(wtvz) in the tidewater region of Virginia and the outer banks of North Carolina, which puts a Spotlight on Independent artist in this region also the creator of VA Underground a Talent showcase where independent musicians can come out and showcase there talents and sell there cd's (artist keep all the profits) and the online royality paying radio station WRAP.Knowa communicates with the thuggist of the thugs to the most studious of scholars allowing all to know what is obtained by living a streetlife, also how to channels energies,aggression and desires to passionately bring forth something of substance

BORN KEMONDIE PATTERSON ON SEP 6 IN BROOKLYN, NEW YORK, HIS FAMILY MIGRATED TO HAMPTON, VIRGINIA IN HIS YOUNGER YEARS. HE GRADUATED FROM PHOEBUS HIGH SCHOOL AND BEING TOTALLY CONSUMED WITH THE CULTURE OF HIP-HOP. " I BEGAN PERFORMING AND LEAVING CROWDS INTRIGUED, FLOODING THEIR FEELINGS WITH EMOTIONS, SIMULTANEOUSLY SOOTHING SOULS WITH SIMILES AND MESSAGING MENTALS WITH METAPHORS "

KNOWA SONG "NO ONE" DEBUTS #3 IN AUSTRALIA RADIO( HIT DISC)

Radio Airplay Specialist 1 /2006-10/2006
MusicForte.com was founded in 2003 and now has offices in New York, Chicago, Phoenix, San Francisco and Japan. Though the musical seeds of our network were planted years ago, the major growth and expansion began when our new software platform was installed in January of 2006. With a range of talents in sales, marketing, advanced computing, and much more, we have envisioned your success and provided the means to help you achieve it. Music Forte has created a better opportunity for anyone that appreciates Music and the Arts.

Online Promoter 4/2007-6/2007
KickStart Promotion thrives on helping artists get their music out to new territories. With a set-up of promotion teams in new territories every month, we are able to offer promotion to djs, radio, music clubs, A&R’s in several countries around the world.


Head Of Urban Promotions 5/2007/9/2007
Pitch network fastest growing network of idea creators and makers! The Pitch Network, Inc. is a group of top business executives looking for people with ideas and talents. We use our global pool of professionals, venture capitalists, and entrepreneurs to help evaluate, prepare, and present new ideas for licensing to corporations and launch them directly into the market.


come join me on myspace