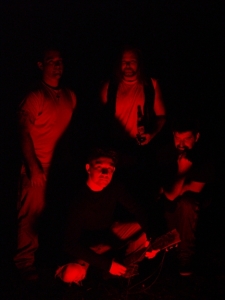 Don Eminizer is the lead singer. He’s a former pro- wrestler and now makes his living as a writer, anybody can box, so Don says fuck Hemingway, pro wrestlers get to wear cooler tights. Don was a TV and radio host, author, and broadcast writer for the better part of two decades, and he’s been at war with himself since birth. He's still losing the battle. During that time he’s worked for numerous sports shows, CBS Radio, and a number of regional television series. He has been published hundreds of times including articles, interviews, poems, and fiction pieces in places as varied as Common Ties, The 19th tee, Thieves Jargon, The Baltimore Sun, and the Bleacher Report. He currently writes scripts for KSNN, has a book deal with Garth Gardener Publishing Co., and has a few film projects in the works. Oh, and there's that 99 Burning habit.

James Frank is co-founder of 99 Burning. James has played guitar for nearly 25 years. Over those years he went to college and to a trade school supposedly to learn the art of recording, and to better understand the broadcasting industry in general, so that one day he might rule the universe with little Frank children. He is currently repopulating the Earth every chance he gets. Meanwhile there’s that damn guitar.

Jon Clark beats the drums like they did him wrong when he was a child. He’s 23 but he still likes the geezer rock. He supposedly likes his drums but the way he abuses them bitches this statement is doubtful. He is, however, addicted to breaking cymbals. A new type of music, in fact, pushes him to break a lot of cymbals. They call it 99 Burning. Oh, and he likes to watch Don hurt himself.

Jeff Zepp has played bass for 20 years. He plays his 4 and 5 string bass without abandon, and he’s done it in clubs in the Mid-Atlantic region since the age of 16. On occasion, he plays so hard he breaks e strings. Try that sometime. Try it using two cars and hooking the e string from bumper to bumper while hitting the accelerator and pulling the cars in opposite directions. It’ll all be fun and games until someone pokes their eye out. Jeff will be there ripping his bass like he's Eddie Van Halen, probably laughing at the guy that got his eye poked out. Jeff was married. Jeff found 99 Burning. Now Jeff is single. He is a bit frustrated. He takes it out on the bass so don’t worry. Oh, and he likes it when mic stands go flying so he's probably found the right gig.
0
What's This
Advertisement