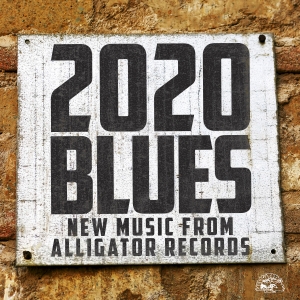 TRACK LIST
1) CHRIS CAIN, I Believe I Got Off Cheap. From upcoming release, Raising Cain, due early 2021.
Alligator's newest signing is a virtuoso guitarist, fan favorite, and four-decade touring veteran of the international blues scene. He's a beloved musician's musician who has recorded 14 previous albums. None other than B.B. King declared, "Now that boy can PLAY the guitar." Guitar Player said, "Cain is an impressive, top-notch guitarist. His full-bodied tone and big voice pack a punch that had me reeling.”

2) SELWYN BIRCHWOOD, Living In A Burning House. From the upcoming release, Living In A Burning House, due early 2021.
Birchwood's searing guitar and lap steel work, along with his incisive, hook-filled songs and pin-you-to-the-wall vocals, places him among the very best of the new generation of bluesmen. Rolling Stone says, "Birchwood is a remarkable, contemporary bluesman...a powerhouse young guitarist and soulful vocalist. A major player...highly recommended.”

3) SHEMEKIA COPELAND, Uncivil War. From upcoming release, Uncivil War, set for October 23, 2020 release
Originally released as a single in June, 2020 (which was world-premiered by SiriusXM Bluesville radio), the topical song Uncivil War has already made an impact. Rolling Stone praises it as "Blues queen Shemekia Copeland's rootsy message song about the divided states of America. Her gospel-tinged vocal is there to soothe and defuse, reminding us that it’s time to listen to one another and, ultimately, come together."

4) CURTIS SALGADO, The Longer That I Live. From Damage Control, due early 2021.
The always true-to-himself, musically adventurous vocalist and harmonica player Salgado -- called an "icon" with a "huge voice" by NPR Music -- delivers one of his most humorously honest original songs with The Longer That I Live. The hard-hitting track is as soulful and memorable as anything he's recorded on his 10 previous albums. Blues Music Magazine says, “Salgado inspires chills. Upbeat and original...poignant and wise with a great sense of humor.”

5) ELVIN BISHOP & CHARLIE MUSSELWHITE, What The Hell?. From 100 Years Of Blues, set for September 25, 2020 release.
On their first-ever album together, the stripped-down 100 Years Of Blues, Bishop and Musselwhite (along with guitarist/pianist Bob Welsh) bring it all back home with some of the warmest and most engaging music of their equally storied careers. Elvin and Charlie tell their musical tales with top-shelf musicianship and sly good humor. The potent What The Hell? finds Bishop taking on current events, winking an eye while speaking truth to power.
9
What's This
Advertisement