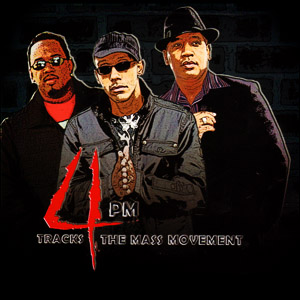 About 4 PM
In 1991 two American brothers Roberto Pena Jr. and Rene Ray Pena, along with friends Larry McFarland and Martiz Ware, formed an R&B group now known as 4PM (For Positive Music). The foursome, originally called IV Real, sang for local talent shows around the Baltimore, Maryland area before pursuing a recording contract in New York City with Next Plateau Records in 1994. A song from their debut album Now's the Time was listed number eight on Billboard's Hot 100 in February 1995. The same year the single, called Sukiyaki, was rated top 100 of Di-Namix hits. It was not long before 4PM began to tour Canada, the United States and Asia.

In 1997 4PM released a second album called A Light in the Dark. The following year Martiz Ware left the group and Next Plateau Records went out of business. The group stopped recording for a couple of years until the Pena brothers and McFarland formed their own production label, Pena Brothers Production.

In May of 2000 4PM would once again hit the studio to record their 3rd album. This self-titled album would prove to be a different experience for Roberto, Ray and Larry. For the first time they would have total control of their project. 4 PM's third album, For Positive Music, was released in 2001 under this new label.

For Positive Music means: Music that does not contain explicit lyrics, does not promote violence, does not degrade women, music for anyone and everyone to enjoy. Our motto is and always will be....STAY POSITIVE

The group has continued recording albums. Their upcoming album, TRACKS 4 the Mass Movement is a treat for all true R&B lovers. Larry McFarland has also recorded a solo album entitled, The Urban Project, under the name Lil Mac. FOR POSITIVE MUSIC is a band for anyone who appreciates smooth harmony a sound that is sure to stand the test of time. The band has toured the world and remain a beloved group in Japan and many other countries.