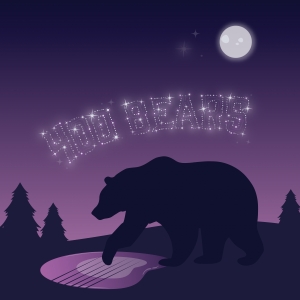 Paul Wilkinson’s songs of home, time, life, joy are deep with reflection and, at the same time, champion the virtue of being present. His art is an example of words and music coming to the surface in the heart of an artist steeped in the tradition of American music. He explains that he has been Influenced by the subtlety of Mississippi John Hurt, the charisma of Taj Mahal and the omnipresence of Bob Dylan in his life. Paul reflects upon his music education from home, as quoted by Washington Life Magazine:
“The records my parents had around — Dylan and Grateful Dead — were a gateway into all kinds of stuff. All of a sudden you’re listening to Merle Haggard and that’s blowing your mind, then Garcia/Grisman, to Doc Watson and Bill Monroe...”
Paul, now putting out a solo album, self-titled and under the name 400 Bears, spent the last fifteen years as a founding member of the band Mason Porter which Rolling Stone listed in their 10 New Country artists you need to know in 2016. Washington Life Magazine called the band "a perfect example of a successful 21st century bluegrass-folk-rock band.”