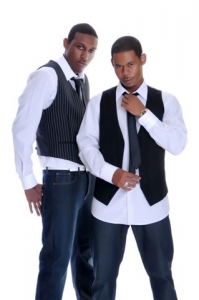 308 are a singer, songwriter, producer duo from South London, UK.

They are brothers who officially formed 308 in February 2007. They have already co-written their first album mixtape ‘No Turning Back’, which includes collaborations with Kele Le Roc (My Love), Sadie Ama (Fallin’), Richie Dan (Call It Fate) and Darren Martyn (Sorry Part 2).

The album mixtape has been well received: ‘Without You’ was played by DJ Cameo of BBC 1xtra on ‘Pirate Sessions’. ‘G.O.D’ featuring Richie Dan was played by Dave P of Choice FM on his Positive Inspiration Show, ‘Don’t Confess’ featuring Kele Le Roc is rated as the top track on Ditto Music’s compilation album on iTunes.

Their debut single, ‘Gots to Go’ has opened doors for them. The video was playlisted on Channel U and was an underground success. It has been played on radio stations up and down the country – from Darren Milby and Lorna Bancroft of The Bay in Lancaster, DJ Bertie B of Kemet Radio in Nottingham to DJ Grind and Decyfa of Express FM in Portsmouth. Ras Kwame of BBC 1xtra chose the track to feature on his ‘Homegrown Podcast’ which showcases the best in UK urban talent.

In 2007 they supported Mutya Buena as one of the winners of the BT Broadband Unsigned Talent Competition. Then in 2008 they opened for multi-platinum selling R&B superstar, Mario, in Nottingham.

They have received accolades from press and Music Industry moguls such as Chris Theylch (formerly of Kerrang!) who described us as "very melodic ... marvellous stuff ..." He also said that 'Gots To Go’ was "…… gonna be a hit" (8th Feb 2008).

Croydon Music wrote:-'……. the next act was smooth R&B 308. Two brothers who definitely looked the part, opened their set with the self named original ‘308’. Their next song, ‘Gots to Go’, seemed to please their female following judging by screams being heard throughout the number'.
( 9th Feb 2008)

In just a year, they have made their mark and now they’re here to stay. In Dec 2008 they were enrolled on Xtreme Talent Artist Agency’s books. With a self-produced and co-written official debut album entitled ‘Ghetto Love’ on the way, and the single ‘Sweat’ already hitting the airwaves, they’re set to become the UK’s hottest new talent.