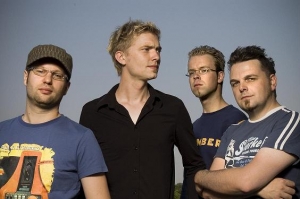 What does the name 2nd Place Driver mean? Nothing in particular actually. It's best to see it as a good metaphor for the stunning way in which the band is heading for the number one position. The four piece combo is riding like the wind. For instance: the last two years the band completed an enormous amount of gigs. Both inglorious hamlets and well-known stages as Parkpop, Metropolis, 013, Paradiso and Nighttown crossed their pad. Name a spot and there's a big chance 2nd Place Driver played it.

It's not an odd thing that 2nd Place Driver is allowed to play on that many occasions. The band translates the term 'electro-rock' in an adventurous, exiting and simply bloodcurdling beautiful way. These gentlemen make real songs of which the melodies in particular are disarming. But 2nd Place Driver can be found pounding their instruments as well. While on stage, the band plays their songs in such way that all its layers, dynamics and profundity turn out in an undisputed climax. The sky is the limit actually. It's not at all boring to watch these energetic musicians and the charismatic vocalist. All this gave the band a renowned live-reputation. In this year, the band has planned to at least confirm this reputation. But they'd rather expand it.

Meanwhile the band members spend just as much time in the studio. In the beginning of 2003 they launched their first nameless effort. Like it's successor, this ep gained only positive comments in many music magazines. The combination of David Bowie's song writing abilities, the industrial feeling of Nine Inch Nails, the freshness of Millionaire and the somewhat elusive, dark sounds of Depeche Mode, as well as 2nd Place Driver's own thick autograph were hailed.
If you wouldn't know better, you'd say this material was recorded in a fancy high-tech studio. But that's not the case at all. The fat productions are the result of lusty producing-efforts in the band's own home studio. A full-length cd was released in 2005. Thanks to this recording 2nd Place Driver hopes to fulfil all high expectations. Chilling, but warm vocals, well-considered guitar- and bass lines, and effective drums are the keywords for this new album. And let's not forget that although 2nd Place Driver likes the retro approach and is not embarrassed by references to aforementioned influences, the band is particularly a 'here and now-group'. This year, the band is going to do every possible thing to convince even more people of these facts.

Back to the future with electronic based retrorock. The music of 2nd Place Driver is like a knight's move: one step back and 2 ahead: retrorock with electrobeats or Depeche Mode meets Nine Inch Nails. Gruesome and heartwarming at the same time.

Facts 2005: 1st single 'Leave' is doing well on Dutch radio (position number 4 in Kink FM's Outlaw 41), the video for 'Leave' is being showed on a regular basis on MTV and TMF, the band won an Essent Award 2005, the band played on the Lowlands Festival 2005 (along with a.o. Foo Fighters and QOTSA) and the show is broadcasted live on MTV, at the end of summer 2005 the 2nd single of the debut album 'Life in the docks' is released.