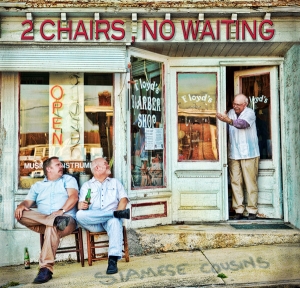 The duo consists of Edwin Lacy on clawhammer banjo and vocals; and Scott Freeman on mandolin, fiddle, and vocals. Both have more than twenty years of shared musical collaboration with the popular break-out group, Skeeter and the Skidmarks. The two have also appeared (together and separately) as guests in various venues and on many recordings through the years. Their musical rapport is intricate yet playful, harmonizing so tightly that, at times, it sounds as if their two instruments blend into one. Whether Siamese Cousins are rollicking through an old-time fiddle tune, interpreting a newer alternative acoustic offering, or painting tonal canvases with one of their original songs, it doesn’t take long to realize the magic of their combined musicianship. Both Edwin and Scott were featured artists for the highly acclaimed Mountain Roads Recordings project, Close Kin, A Reunion of Bluegrass & Old-Time Music. Their music blends so well that they consider themselves ‘joined at the frets’, hence Siamese Cousins.

Scott and Edwin are the heart of Siamese Cousins and will be joined on their first recording, 2 Chairs, No Waiting, by a veritable Who’s Who of regional super-pickers: guitar virtuoso, Brandon Davis; two-time National Bluegrass Banjo Champion and guitar wiz, Steve Lewis; master of the five-string banjo; former Bill Monroe Blue Grass Boy, Butch Robins; premiere multi-instrumentalist and studio artist, David Johnson; and debuting on this album with a tremendous rendition of Gordon Lightfoot’s The Way I Feel is Scott’s daughter, Dori Freeman, who is gaining a strong musical following of her own; and Willard Gayheart & Sandy Mason, bandmates from Skeeter & The Skidmarks. 2 Chairs, No Waiting is scheduled for release in Mid-September 2012.

Edwin Lacy was born and raised in the mountains of Southwest Virginia and learned banjo at his father’s knee. After playing professionally and semi-professionally for many years in various folk and old-time bands, Edwin answered a call to the ministry. He now serves as a pastor and also plays banjo with Skeeter and the Skidmarks. Edwin’s banjo style is truly unique. While reminiscing he says, “My unique approach to clawhammer banjo is the result of blissful ignorance. The only banjo players I heard growing up in Southwest Virginia were my father, who played a two-finger style reminiscent of Charlie Poole, and Scruggs-style bluegrass pickers. When I first heard frailing from J.U. Lee, a young man who had moved into the area from Florida, I abandoned the two-finger picking I had learned from my father and began playing clawhammer. Still living in somewhat of an old-time music bubble, I learned tunes from fiddle, guitar, mandolin, hammered dulcimer, and bluegrass banjo renditions, transferring the licks I liked into the clawhammer style. I was so unaware of other clawhammer banjo players that I honestly thought I was one of perhaps four banjo pickers left still playing the old mountain style. This idea was obliterated when I attended my first fiddler’s convention (Saltville, VA) and realized there were 52 other clawhammer banjo players registered for the competition”. Edwin was elated to find so many wonderful old-time banjo players, but the years of isolation and ignorance had done their work and his approach to the banjo, absent of almost any outside stylistic influences, resulted in a way of playing uniquely his own.
Scott Freeman grew up in an area rich in music and tradition, Mount Airy, North Carolina, home to many talented entertainers, and Scott is certainly one of “Mayberry’s” finest. He plays, arranges and writes songs that have been recorded by some of the top touring bands in acoustic music. As well as being a professional musician, he is also a traditional music teacher, and a musical instructor with Pete Wernick. He has taught in many workshops: Grass Valley California, Ola Belle Reed Festival, Merlefest, Lowell Massachusetts, etc. Scott also lends his talents to many groups including: Freeman & Williams, Skeeter and the Skidmarks, The Crowe Brothers, The Mountain Home Bluegrass Boys, and countless others. He now lives near Galax where he teaches traditional music and hosts a weekly Friday night concert series, The Fiddle and the Plow, with his father in law, pencil artist Willard Gayheart.