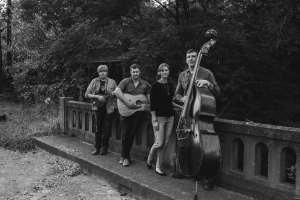 "Everyone says it, but we are truly eclectic..." says bassist Greg Thurman about his band, 18 Strings - an acoustic string trio based out of Morgantown, WV. The three members- Andy Tuck (vocals/guitar/harmonica), Chris Jones (mandolin/fiddle), and Thurman (bass) - come from different musical backgrounds spanning everything from jazz to folk, and rock to classical. The result is a seamless fusion of styles that incorporates smart songwriting, tight harmonies, refined technique, and an airtight groove uniquely defined as Appalachicana (part Appalachia, part Americana).

The band released its self-titled debut album in mid-2016 and have since signed with Mon Hills Records, West Virginia University's record label, with whom they produced their sophomore full-length album, Single Wide (released in October 2017). Their third effort, Natural Voice: Songs from Earth, is set to release in late Spring, 2018, ahead of a busy tour schedule featuring stops at FloydFest 2018, Back Home Appalachian Arts and Music Festival, the Whiskey Rebellion Festival, and more.

Appalachia is a culturally rich region that 18 Strings is proud to call home. Their Aesthetic draws from the people of the mountains and their stories. The organic sound of voices, a guitar, mandolin, and upright bass matches the miles and miles of rolling hills that hides centuries of musical tradition. With a cultural backdrop so rich and an ever-evolving scene, it's a wonderful place to be a musician.

While the band's music is rooted in Appalachian musical styles, the musicians themselves are influenced many other genres, including acoustic classic rock songs like "Going to California" by Led Zeppelin and "Fearless" by Pink Floyd, and other artists such as Bob Dylan, John Prine, Lead Belly, Creedence Clearwater Revival, The Allman Brothers Band, and the Beatles. Appalachicana is geographical in location, but American music in scope.
3
What's This
Advertisement