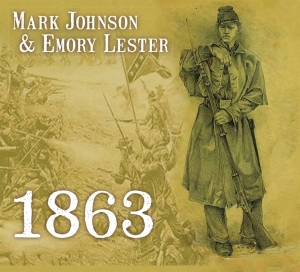 
1863
One hundred and fifty years ago this year, in the year of our Lord 1863, our land and our country were being ripped apart in a series of great battles that tore across our country. These battles would forever determine the direction and destiny of our beloved United States and for better or worse, shape and mold who we are as a people today. It has often been referred to by historians as America’s Second Revolution.

The war had been ongoing for two years by 1863. But it was the music of that time that guided these armies and embraced the passion’s and enflamed the very souls of all the Americans across the country who lived and died back in those days.

The marching music that the soldiers moved off to war by, were often play with energetic rhythm’s or slowly and with great melancholy as the realities of the conflict wore on and the toll in human lives mounted.

This collection of instrumentals is our attempt at capturing that intensity and feeling. It is our musical statement, our interpretation’s, on just how much the passion and intensity of that old America music form is as relevant today as it was one hundred and fifty years ago.

It is our hope that anyone who listens to this project will feel the same intensiy of the old tunes and the new ones also as we did when we recorded them. Enjoy.

MARK JOHNSON
Mark Johnson has revolutionized the art of clawhammer banjo by adapting its techniques and rhythms to the demands of playing in a bluegrass ensemble. He calls his banjo style Clawgrass. He has performed and recorded with many bluegrass and acoustic luminaries on the music scene today and is also a gifted teacher and songwriter. . His second recording -- Acoustic Rising with Emory Lester, released on the Crossroads/Mt. Home Record Label -- was nominated by the International Bluegrass Music Association (IBMA) in 2007 as Instrumental Album of the Year. Marks music was used in the 2012 Dodge Grand Caravan television commercial and in September of 2012, Mark was named as the third annual winner of the prestigious Steve Martin Prize for Excellence in Banjo and Bluegrass Music Award and has performed his clawhammer banjo style with Steve Martin on the Late Show with DaviLouisville, Ky, Nashville, Tennessee and Raleigh, North Carolina and will be appearing at IBMA 2014 Clawhammer banjo workshops in Raleigh, NC this September.


EMORY LESTER
Emory Lester is one of this day’s foremost exponents of the acoustic mandolin. The power and attack of his mandolin playing are unmatched, and his sound is infectious. His landmark recording projects ‘Pale Rider’, ‘The Emory Lester Set’, and ‘Cruisin’ the 8’ have placed him among the elite mandolinists of our time. His latest solo recording titled ‘Reminiscing Today’ showcases Emory’s musical creativity, and skill as a mandolinist and multi-instrumentalist. Emory has undeniably inspired and influenced many of today’s current wave of modern day mandolinists, pointing the way with his clean, clear, fast and efficient mandolin technique.

Mark and Emory have toured all across the U.S. , and have been featured on several performances with Steve Martin, most notably on the ‘Late Night with David Letterman’ show in September 2012. Emory also currently performs with ‘Wayne Taylor and Appaloosa’, doing shows across the U.S. , Canada , Europe and the U.K., as well as with his own band, the Emory Lester Set, at concerts and festivals nationally.

A life-long Virginia native, now living in Ontario Canada , Emory has been teaching master series workshops at events such as the Steve Kaufman Camp, the Mandolin Symposium, Transatlantic Bluegrass School in Wales UK, the Alaska Guitar Camp, and many other prestigious schools and workshops far and wide. He has also produced many recording projects by other prominent artists.