Uncle Earl - She Waits for the Night 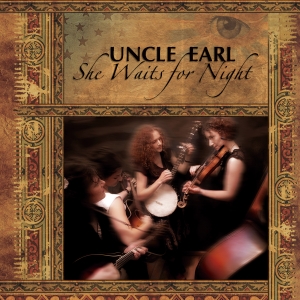 “Uncle Earl deliver both sides of the coin. They have a deep respect for tradition but feel in no way limited by it. With each song, they make the whole journey.”
–Dirk Powell

Did you ever have a favorite uncle? Did he wear earrings, play screaming fiddle tunes, sing in a full-throated alto, and clog? Mine never did, but I have a new favorite now.

The good old boys down at the Uncles’ Defense League might ask if this upstart can cover some of the traditional functions, like picking gentle tunes on the banjo or guitar, telling stories, or downing big helpings of Jack Daniel’s and shouting. Sorry, Uncle Earl’s got all that covered too.

They’re used to delivering both sides of the coin. Their groove has both drive and lilt. They deliver some arrangements with a wink and others with an unusually emotional sincerity. They have a deep respect for tradition but feel in no way limited by it. Always, they don’t start unless they’re aiming to finish. With each song, they make the whole journey.

You might want to warn your favorite uncle that his position is threatened. Or, better yet, buy him the CD and let Uncle Earl ease in on him from the side, so he won’t see it coming. He’ll waltz or two-step or flatfoot right out of the picture with a grin on his face and a rhythmic wobble in his neck. Have pity on him. It’s not his fault he can’t compete.

We send love and appreciation to our families, especially our parents: David and Nenice Andrews, Bruce and Jenny Bartlett, Dan Gellert and Debbie Posey, Bob and Carol Groves, Ron and Molly Foerster, and Don and Chrissy Washburn.

Special thanks to the people who worked right along with us on She Waits for Night: Bruce Bartlett for pre-production in Indiana; Bela Fleck for arrangement ideas; Mike Kerwin, Sinead Rudden, Josh Caffery, Claire Oliver, Christine Balfa, Amelia, and Sophie Jo for unmatched hospitality in Louisiana; Jeff Brewer and DA Calloway in Branson; Reid Scelza in Nashville; Ann Blonston, Bill Carlson, David Glasser, Sally Van Meter, and Garian "g’Earl Friday" Vigil for being our support team in Colorado; Corey DiMario, Aoife O’Donovan, and Ruth Ungar (the sequence committee); Megan Downes for her skill as an editor; Peter Irvine for all-around smarts and good hats; Gus Skinas for the groovy old Sony mic we used for all the vocals; Mary Brabec and the staff of MB Booking for having faith in us as we grow; Nettwerk Records for thinking outside the box; Ken Irwin, Steve Jurgensmeyer, Brad San Martin, Sarah Lainie Smith and John Virant at our new home of Rounder Records; and, for truly "kicking the fat of the ass," we thank Dirk Powell.

Here’s a big "Yee-hoo!" to our fellow old timers who keep it real at the Clifftop, Mt. Airy, and Galax Fiddlers’ Conventions; to all the young bands and performers who are living the music and creating family for us out on the road; and especially to the Uncle Earl Street Team and everyone who comes to our shows.

Last but not least, we send love and thanks to Sharon Gilchrist, the stunningly talented bassist, mandolin player, singer, and songwriter who has been playing with Uncle Earl since September of 2004.