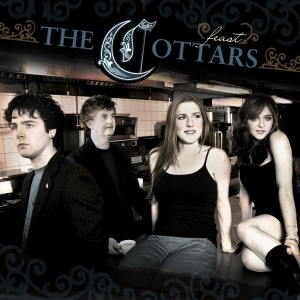 The Cottars have come a long way, starting as children performing to a hometown audience, through their teen years when they toured the world and shared stages with the biggest names in the business. Now they have evolved again, into young adults, mature in their skills with new faces and outlooks.

Even with their relative youth still apparent, it seems that The Cottars have been a part of Canada’s East Coast music scene for years. They have the nominations and the hardware to prove it, including East Coast Music Awards and Nova Scotia Music Industry Awards. They have the road record to prove it as well: tours throughout Canada, shows in Europe and thirty-eight U.S. states, two tours of Japan and appearances at major festivals around the world.

Joining the original Cottars members Ciarán and Fiona MacGillivray are two new band members Claire Pettit and Bruce Timmins. Claire is a fiddler and singer from Upstate New York. She adds a fresh bloom to the combination with her new style, different tune selection and lovely voice. While her roots aren’t in Cape Breton, Claire’s family has developed a strong love for the place during trips to the island.

On the other hand, Bruce is a veteran guitarist with a wealth of skill and experience; both on stage and in the studio. Highly respected among his peers, he can fall into any style, from straight Celtic to heavy Blues, and sound right at home.

This quartet, Ciarán and Fiona, Claire and Bruce, has become the evolutionary culmination that is now The Cottars.
Feast is their fourth CD, extending and expanding The Cottars’ music without ever losing track of their roots.
Their roots show through clearly when they dust off something old and masterfully link it with something more contemporary.

“Oidhche Mhath Leibh” is a familiar Gaelic parting song, known in English as “Goodnight To You.” This number receives a new treatment, not far from the original, but enough for it to stand out on its own. Fittingly, it’s the last cut on the CD, a great way to say goodbye.

The Cottars have also taken the time to dig around through the obscure, coming up with things that may not be well known but fit the mood and the moment of the CD.

“Leave Tomorrow Till It Comes,” is a song from Glenn Yarbrough that was recorded for an animated movie based on Tolkien’s Lord of the Rings, done years before the successful Peter Jackson movies. Ciarán had that movie and loved the song. “Seagull,” from Steeleye Span’s Peter Knight, originally appeared on the group’s 1989 Tempted and Tried recording. A song heralding a commonly played game, it gets a fresh lift and a spirited rendition, a fresh dose of fiddle and some nice harmonies.

Meanwhile, Mark Knopfler is best known for his works with Dire Straits, as a guitarist, vocalist and writer. It’s his last skill that The Cottars call on, putting a bluegrass tinge to his “Fare Thee Well, Northumberland” and nicely splicing in a fiddle composition by Claire in the process. The group started out wanting a nice tune to use as a bridge. After Claire heard the song for the first time, she was inspired to write the companion piece in just a few minutes.

And speaking of writers, Fiona has come into her own with this CD, adding two new and beautiful songs to the mix. Ciarán told me that he and Fiona approach a song from very different directions: he hears the music first, the structure of the notes and the chords; she hears the words. She is quick to agree that for her the words are paramount.

She’s done a lot of writing, but only a few of her songs have gone beyond her own eyes and ears. She confides that she does some of her best composing in that time between the realities of the day and the gentleness of the night; her mind is cleared and she just reacts to the layer of consciousness that remains.

“On A Pier” came about that way, arriving in her mind in a matter of minutes. It has an “old” sound, emphasized even more by the distinctive and deliberate piano. While “Hymn For N” has a similar tempo and texture, it exudes an unspoken sensuality, unexpected from one so young. The identity of “N” is never discussed or revealed. It could be somebody…or it could be nobody.

Taken together, the whole concept of Feast gives you a wonderful progression in music and sound, from the recently written “Overture,” through the interesting mix of modern and traditional, to the lovely traditional Gaelic piece that says goodbye.

Throughout the recording The Cottars provide virtually all of the music, as all are multi-talented instrumentally. It’s a wonder to watch them move effortlessly from one instrument to another with such ease.

The main ingredient that distinguishes The Cottars from so many other groups is the depth of their vocal skills. Claire has just started to develop her voice in this group’s setting, while Fiona’s powerful and passion-filled voice has been heralded as spectacular for years.

Considering their background, it’s no wonder that Ciarán and Fiona take such pleasure from their voices. Their home, from the time they were born, was filled with music. Their parents were (and are) singers, their father a songwriter of such renown that one of his works has been recorded over 150 times, while another has been performed or recorded in six different languages. Music was always present and not just traditional or folk, but a wide variety of styles and types, shared amongst the family and with the many friends who joined in.

As you listen to this CD, think of all that has gone in to it: the history of the tunes, the process of creating the songs, the evolution of The Cottars themselves. Yes, everything evolves, and continues to evolve.

Music Commentary by The Cottars:

1) Overture — We developed this overture in the kitchen at Lakewind Sound Studio.

2) Fare Thee Well, Northumberland/The Purple Wave — We loved this song from the moment we first heard it. It bridges the gap between Celtic and Bluegrass, and the guitar accompaniment was influenced by the playing of Doc Watson. Claire composed the slow reel in the middle of the piece.

3) Seagull: — From the pen of Peter Knight (of England’s influential band, Steeleye Span), “Seagull” was inspired by the pub game Shove Ha’ Penny, which came in being around 1840. “Gold watch” and “three in a bed” are part of the scoring terminology of the game, which is still popular in some areas of Britain.

4) The Munster Suite (instrumental) — This guitar duet is unique in that the tunes were learned from the playing of two terrific female guitarists — Julie Henigan and Sarah McQuaid.

5) Your Love’s Return (Song For Stephen Foster) — Canada’s Gordon Lightfoot has many great songs to his credit. We feel this lesser-known composition is one of his most beautiful.

6) Young Munro — This rare old Scottish folksong owes its survival to the fact that it was transplanted to Canada. One version of it appears in a local book called The Cape Breton Songster (1935), another in an Edith Fowke collection. The Scots Gaelic phrase “Bithidh Charlie agam” could be translated “Charlie will be mine”. Claire sings the female lead.

7) The Contradiction Set (instrumental) — Claire and Ciarán put this medley together while jamming one night in Mira. The first reel is from Prince Edward Island; the last two were composed a long time ago by Scotland’s J. Scott Skinner.

8) Leave Tomorrow Till It Comes — Struck by the elegant simplicity of this song, Ciarán learned it first as a solo piece. Later he asked Bruce to add a classical guitar to the arrangement, and this is the result.

9) On A Pier — An original song by Fiona: “I lost hold of your heart like a fish on a pier/And it slipped away into the sea./But if just for tonight won’t you bring me a scale/To crush into powder and dust like a veil/Of your presence and sharp souvenirs./And I’d spread it like spice on my bed in my cell,/All over my pillow and under my sheets,/And I’d float into sleep to the salt in your smell/ Of your brine and a broken man’s tears./And I know what a wonderful sleep I would get/With the rocks of my deck and a fish in my net,/And a lathering moon like a man in a sweat/With your brine and a broken man’s tears.”

10) The 23rd Of June — This is an Allister MacGillivray arrangement of an old Irish tune about the weavers’ holiday, the 23rd of June. We first heard the song from our late, great friend Tommy Makem, who recorded it with The Clancy Brothers in a Chicago folk-club in 1962.

11) Hymn For N — An original song by Fiona: “I may not have a heart to give you,/But at least I have words that are softer than skin/That are drawn from the hollows of sweetness./And I wish I could open before you;/I’d like to receive you in all of your skins/When you’re crazy for love/But while starving for love/I’ll just sit here and watch you get thin./And, Babe, if you ever feel broken/By my tower of stone that your love can’t explain/And you choose to step down from the mountain,/Then I’ll bid that the roses be spoken/And I’ll beg you and plead you and call on your pain/That you come back to me/And you’ll come back to me/And be lone on your mountain again./So, Baby, stick around, stick around/Like a bird on winter’s hem./Hey, stick around/And, Baby, wear this wreath/Until the woven gale condemns./I may not have a heart to give you/But I’ll drop you a bloom from the arm of the tree/That was grown in the hollows of sweetness./So you’ll weave me a cradle in earnest/To fill with the things you’ll surrender to me/While you’re crazy for love,/While you’re starving for love/And maybe you’ll never be free.”

12) Goodnight To You (Oidhche Mhath Leibh) — Ciarán learned this century-old song of farewell from Beth MacNeil at the Community Centre in Grand Mira, Cape Breton. Several musical friends from our island dropped by to join us on the chorus. We’d like to thank John Alick MacPherson who encouraged us to record it, and we dedicate this performance to the memory of Grace Urquhart Timmins.