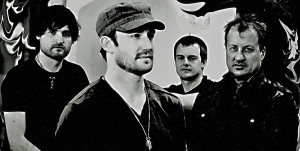 To put it simply, Teak is the real deal. This Melbourne based rock band isn’t about glitz and glamour. They aren’t about bad haircuts and gaudy costumes. This is a rock band that in a world of fashionistas knows what matters most–the music! Teak began as Steve Draper (Vocals, Guitars), Mark Gubiani (Bass) and Greg Szymanski (Drums). This trio played alternative covers at venues all across Melbourne until early 2009. It was then that the band came in to their own, began writing their own material and after a well-placed ad brought aboard Aaron Ninness (Guitars, Vocals). “His insights into playing and understanding sonics, melody, rhythms and subtlety of detail and space has been a creative force in Teak and its sound,” Steve Draper said. Soon after the addition of Ninness, the band recorded their first single “Looking For You.” While the band agreed that this song was good, they knew in their gut that this was just a step towards something much better. That next step toward greatness was their first EP. While it was only available for purchase at shows and online, their debut EP sold out immediately and was an instant hit with fans. That was enough to encourage Teak to go all in with their first full-length album. With the creative input of producer and engineer Warren Hammond, the band succeeded in creating an album that captures the sound and energy of a live performance, while retaining a well-polished edge. "From the opening song “This Time” to the closer, “St. Cajetan” it’s a guidebook for how to make a radio friendly album without compromising any of the heart and soul of a rock band," said Only Australian Music. Teak’s style has been affectionately described as “the thinking person’s rock.” "In a nutshell,” Draper said, “we play rock songs with depth so there is something for everyone." It’s this uncompromising dedication to presenting rich melodic rock with meaningful lyrics that has won over fans not just in Australia, but also around the globe. From the US to the UK, Teak is synonymous with real rock & roll. Still, despite the band’s international recognition, they still remain quaintly surprised to hear others listening to their music. “I was at a party recently,” Draper recalled, “and one of our songs was in the mix the DJ was playing, which was very cool as no one knew I was there. Things like that are great for a musician." While Teak has garnered comparisons to The Foo Fighters, R.E.M., Elbow and The Church, they pride themselves in being original. "We don’t want to sound like every other band or the latest fashion,” Draper said. “We just have the rule that if we really dig it, then we do it." This attitude toward originality has lead to high-energy live performances that need little in the way of spectacle. “I want the musicianship to shine, not the gadgets,” Draper said. “We work very hard at having a tight, energetic and powerful sound that sounds better than the record." That sound will be heard soon at venues all across Australia, and possibly locations abroad should enough fans demand it. In the meantime, look for Teak’s self-titled album available now on iTunes, CD Baby and more
17
What's This
Advertisement