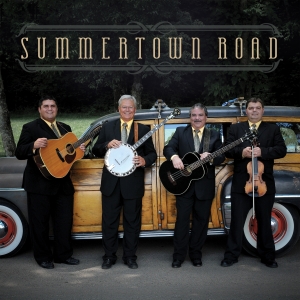 Summertown Road broke onto the bluegrass scene straight out of Ashland, Kentucky in 2008 and although their album which is came out in March 2010 was their debut album, this is hardly a band of upstarts – the band members have years of experience under their belts, and are now on the chart for Bluegrass Unlimited.
Singer, Bo Isaac, started off his career at age 5 at the Kentucky Opry, then toured with Dave Evans and eventually as a solo artist. His tenor voice is piercing and true and appeals to listeners searching for a modern lead vocalist sound. banjoist, Elmer Burchett, is one of Kentucky's finest bluegrass banjo and mandolin players. He has backed Alison Krauss at the Grand Ol' Opry in Nashville, having played with many headliner groups such as Pine Mountain Railroad, Dale Ann Bradley, Jr. Sisk, Wyatt Rice, David Parmley, Lou Reid, and Ronnie Bowman, Elmer shares the same vision as Summertown Road, and that is to consistently deliver high-energy performance, cutting edge sounds, and hard-driving traditional bluegrass. Mandolin player/singer, Zach Rambo, from north eastern Kentucky, began singing at a young age and began playing guitar at age 7. He started his bluegrass career with the band, Bottom Line. Rounding out the quartet is bassist/singer Randy Thomas (The Peach Mountain Boys, Dave Evans and Hylo Brown), who anchors and propels the band’s infectious rhythms.
With Summertown Road’s skillful songwriting, emotional vocals, tight harmonies, and first-rate musicianship, they manage to straddle both sides of the bluegrass spectrum at once – the traditional and the contemporary – appealing to every bluegrass fan imaginable.

Summertown Road is a fresh and creative bluegrass band that is comprised of well-seasoned traditional and contemporary musicians, singers, and songwriters that have come together and are establishing themselves as a welcome sound in bluegrass music.


Bo Isaac
A part of the Kentucky Opry and a member of the Kentucky Music Hall of Fame, Bo joined the musical groups of Ernie Thacker, Dave Evans, and Larry Cordle. He has also made guest appearances with IIIrd Tyme Out and Marty Raybon. As a soloist, Bo’s first single stayed on the bluegrass charts for 10 months. He was nominated for Emerging Artist of the Year.

Randy Thomas
His name and music have been included with groups such as Dave Evans, Tony Rice, The Peach Mountain Boys, Hylo Brown, Don Reno, the Marshall Family, and Bo Isaac and the Wheelwrights.

Elmer Burchett
One of Kentucky's finest bluegrass banjo and mandolin players, and also a singer/songwriter, he has backed Alison Krauss at the Grand Ole' Opry in Nashville and toured will Phil and Don. Having played with groups such as Pine Mountain Railroad, Dale Ann Bradley, 5iveSpeed, Jr. Sisk & Rambler’s Choice, Wyatt Rice & Santa Cruise, David Parmely, Lou Reid, and Ronnie Bowman & the Committee Elmer shares the same vision as Summertown Road, and that is to consistently deliver high-energy performance, cutting edge sounds, and hard-driving traditional bluegrass. Summertown Road is happy to have them in their band.

Zach Rambo - Grew up in a small town in north eastern Kentucky. He began singing at a young age and began playing guitar at age 7. At 12 he began playing the mandolin, recently adding banjo, dobro, and bass the list. He started his bluegrass career with the band Bottom Line.