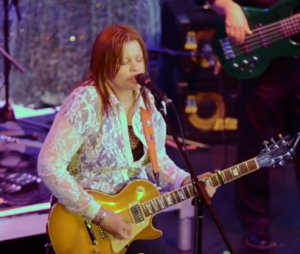 LIVE BAND VIDEO http://youtu.be/FFtH7LgYh6k
Participant 2012 International Blues Challenge
Winner 2011- Australian Blues Music Chain Awards-Female Vocalist of the Year.
Winner 2010-Victorian/Tasmanian Blues Award Female Artist of the year.
Winner 2010- Airplay Direct/Michael McClune Blues Radio Promotion Contest.
Number 3 on B.B. King's Bluesville picks to click 27th November 2010
“Fantastic voice, beautiful music, great original material”
2012 International Blues Challenge Memphis
“Immensely talented…natural Soul-Blues resembling classic Hi and Stax sounds of Memphis…sultry vocals..has complete mastery over her Les Paul Gibson”
Al Hensley, Rhythms Magazine, Australia
“Thanks for helping us sound good”
Bill Wax, B.B. King’s Bluesville, XM Satellite Radio, U.S.A. & President of the Blues Foundation
“Wow…great sound…Paige has a superb and powerful voice…her band is outstanding”
Steve Jones, Blues Blast Magazine, U.S.A.
“…an outstanding album”
RadioIndy.com Phoenix, U.S.A.
“Lush, rich, compelling…..an amazing piece of work”
John Lamp Sleepy Hollow Blues Club/Pulse FM, Geelong, Australia.
“Stevie’s voice is amazing, effortlessly soaring from deep and husky to high and pure and back again. And her guitar playing is great……musically the album is beautiful”
Gary deWall Sydney Blues Society (Blues Times), Australia
“…singer guitarist songwriter loaded with soul and blues feeling…a blues and roots CD with an impressive spread of styles, quality musicianship and a soulful silky vocal”
Geoff Forbes Melbourne Blues Appreciation Society Bluesletter, Australia
“Wow!! This girl is amazing, she has a fantastic voice that has been touched by angels… perfectly balanced attractive songs…talent exudes from every pore of her skin”
La Hora Del Blues, Spain
“…the soul feeling from her voice shines…”
Rootstime Magazine, Belgium
(Full reviews available at www.SteviePaige.com )
Critics have described Stevie’s voice as “superb” and “amazing.” Couple this with reviews of “great guitar” “Impressive songs” and an “outstanding band” and it is clear this Australian Soul/Blues star has announced her arrival to the world.
Brought up in the country town of Hanging Rock in Victoria, Stevie first became interested in music whilst watching the hit TV show ‘Fame’. So at the age of 10, Stevie grabbed hold of her first guitar and never looked back.
The vast array of music played in the family home would in later years have a significant impact on Stevie’s writing style. Sound tracks to the big musicals like Oklahoma, Carousel and Don Quixote fostered a love of the ‘grand’ production. Even as her attention moved to the classical guitar, the draw to the more dramatic orchestral guitar music as opposed to the solo format was very evident.
Making good on her ambition to attend the ‘fame’ school, Stevie audition for and was accepted to one of Australia’s most prestigious music schools, ‘The Victorian College of the Arts’. Despite excelling at the college as a classical musician and an offer to continue studies at London’s Royal College of music, the growing ambition to explore another side of the music world was proving irresistible. The seed for this was planted quite accidently when Stevie was asked to fill in for a local Blues Brother’s tribute band. Fronting up to the show with her trusty classical guitar, the good humoured band firmly placed a borrowed Stratocaster in her hands with a “there ya go, plug that it in.”
With that, Stevie took her first, if somewhat flustered steps to playing on stage with a band. The band and Stevie were about as rough as they come that night, but the chemistry was magic. The proverbial light had been turned on and it was a significant turning point. With absolutely no doubt in her mind that this was the kind of performer she wanted to be, it was still to be determined what kind of artist she would be. Stevie began performing in numerous rock and cover bands, as well as releasing her first album and an EP. But it wasn’t until Stevie came across a small independent Blues label in Australia that her eventual destination began to take shape. Encouraged to explore the world of Blues, Stevie set off across Australia armed with just her guitar and a stomp box. Four years of solo touring, exploring new songs, a solo album and the energy and enthusiasm from the growing fan base forged a confident and exceptional talent. Stevie was born to sing the blues and soul is her perfect medium.
Stevie’s new soul album “Welcome to the Big Time” marks her departure from performing solo. The coupling of ‘that voice’, signature guitar and a three piece rhythm section, punchy horns and lush strings produces a vibrancy and tone that is reminiscent of the “Memphis Sound” from Stax and Hi Records during the late 60′s. Adding weight to the album is Stevie’s pairing with Blues legend Charlie Musselwhite on an acoustic rendition of “Ol’ Man River.”