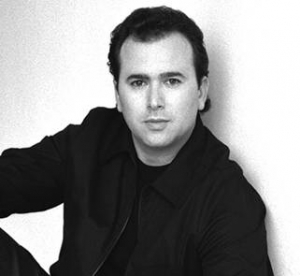 Soleil Moon isn’t so much a band as it is a process, one that finds top-shelf music-biz pros – producers, writers, and first-call session musicians – playing the music they love in order to discover what truly matters to them. Not that working with everyone from Beyonce to Richard Marx -- as the busy players behind Soleil Moon have done -- isn’t a thrill in itself, but this is the project that lets these musical journeymen get in touch with something very personal. The latest example of what that process sounds like is the second Soleil Moon album, On The Way To Everything; the man who makes it all come to life is Larry King.

No, not that Larry King – save the jokes, he’s heard them all. This Larry King is a mind-bogglingly multi-talented singer, songwriter, player, producer, and bandleader (whew!) who has been a full-time musician of one stripe or another since he was 12 years old. When he was only seven, the Chicagoan wandered almost by chance into a fruitful career as a child actor in television and radio commercials. He worked constantly, and began singing and writing by the age of 12 – throughout his teens he’d work in film and belt out commercial jingles for TV and radio by day and work with bands on a local level at night, alongside his drummer brother. In his college years, King decided to put acting aside and to dedicate himself exclusively to music. He moved to L.A. in the late ‘80s, forming the group Human Factor. They cut a record for the Warner Bros-distributed Caliber label that earned some attention, but by the early ‘90s, they disbanded and King returned to the Windy City, where he scored a deal as a staff writer/musician for River North Records. He returned to lucrative session work as well, becoming an in-demand singer for “every jingle that had a guy screaming his balls off,” as he jokingly describes it – these included spots for everything from Gatorade and Coke to Long John Silver’s restaurants, Atomic Fireballs and Lemonheads candies. Before long, King’s connections led to him becoming something of an entrepreneur, establishing his own recording studio, publishing business, production company, and more -- all of which are still thriving – but after this long list of twists and turns, he finally found his way to Soleil Moon.

King sees life as “a constant state of reinventing ourselves,” and for him that meant partnering with keyboardist/producer John Blasucci to bring life to some of the more personal songs he’d been writing, ones that wouldn’t become part of his production projects for other artists. “They’re tunes that are just written for me,” he explains, “I like to do material that’s kind of art-rockish, album-oriented…timeless tunes that are more about orchestration and less a ‘let’s make a pop tune for radio and follow the trends’ kind of thing.” The pair dubbed their partnership Soleil Moon, expressing the Yin/Yang-like balance of both their working dynamic and their music. Supported by a batch of world-class players, Soleil Moon released Worlds Apart in 2000, making a big impact on Adult Contemporary radio with “Willingly,” “Never Say Goodbye,” and the title track.

A decade later, Soleil Moon is finally set to unveil the long-awaited follow-up album, On The Way To Everything. Why the wait? For a guy with as many irons in the fire as King, it’s not so easy to get the kind of clear head you need for such an all-consuming labor of love. The songs were recorded over the past 10 years, whenever King and his cronies could steal an opportune moment in the studio in between other projects. And while it’s not easy throwing everything you’ve got into an endeavor that’s more about artistic expression than commercial appeal, it’s a risk Soleil Moon is willing to take for the sake of On The Way To Everything. “I don’t want to be told who I am, what I am,” says King, who likens the prospect of promoting one’s art to “selling blue sky.” He and Blasucci have lovingly crafted this record as a personal statement, not a business venture. “I’m putting out a second record because I just can’t help myself,” King readily confesses.

Blending bittersweet, melodic ballads, burning hard-rock riffs, percolating R&B grooves, and anything else that happens to suit their fancy, Soleil Moon has made an album about life’s journey, and the conceptual arc is so striking that there’s already been an offer to turn it into a musical. “There’s always a message about human nature in my material,” says King, and that’s borne out all through the album. “History Repeats” is a pulsing, powerful history lesson lamenting how rarely the human race learns from its mistakes. Lush, soaring ballad “Love the Way You Love” deals with the joys and complexities of romantic relationships. The emotional travelogue really kicks into full gear with “On the Way To Everything,” whose blend of hip-swiveling R&B rhythms and propulsive pop melody frames a father’s hopes for a newborn child just beginning to play the game of life. Soon, however, things turn darker; “The record kind of takes a turn, like human nature does,” explains King, “We go into ‘Goodnight Irene,’ which is about the death of a child.” The country-tinged, power-chord-driven narrative of “Freedom” goes on to reflect on the horrors of child abuse, and the lengths to which a battered boy must go to escape. Then the churning instrumental rocker “Burn” appears, exploding with a confusion and anger that are natural reactions to the previous track’s tragic tale. After some infectious odes to aging and wanderlust with “Down”, the transcendent “Move On” returns us to the album’s “life’s a journey” theme, before the big, bold, almost U2-like “Here I Am” closes things out with a statement of joyful acceptance, the kind that can only come at the end of a soul’s long, eventful travels. “It would make the perfect finale for a play!” says King – he’s laughing, but it’s no joke.