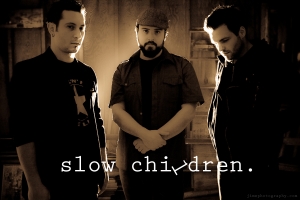 Once upon a time in a small town in Oregon there were three young boys that became fast friends. What began as a childhood friendship has already lasted longer than most. This is the story of how Caleb Moffit, Kevin Hutman and Bryan Bacci—now known as the band, Slow Children—came to be.

As youngsters in the eighth grade, Caleb, Kevin and Bryan met and instantly became friends. In middle school they picked up instruments and thus began their early interest in music. Of course, they had the added benefit of Caleb’s dad being their music teacher not only in school, but also at home, giving guidance tempered by his own love of music. And this was no ordinary music class—it was a class in music production and theory! They recall that at the time they didn’t realize how important all that music theory and knowledge of the “biz” that Caleb’s dad was providing them would be. However, now they have come to realize that they were so very fortunate to receive this kind of hands-on instruction, and their solid songwriting is testament to that.

In their senior year of high school, they, like so many others, decided to form a band. Caleb is the one with the oh-so-smooth vocals; Bryan on guitar is dynamic; and add to that Kevin on percussion, as he floats between drums and congas like the best. And the rest, as they say, is history. After high school the threesome hit the road, living in their van and traveling up and down the West Coast. After a while of this demanding lifestyle, the three ended up in Las Vegas and decided to settle there for a while, now calling it their “home away from home.”

In a sea of bands where they all begin to sound alike, Slow Children is something different. Their music creates many moods and they perform their repertoire from completely acoustic to full-on electric. They are spending their time, these days, performing at venues in Vegas such as House of Blues, then going to California to perform at the El Rey and other high spots with bands such as Floater (for whom they have opened on several occasions), then ending up in their home state of Oregon to perform for their loyal fans who eagerly await their return.

If you haven’t had a chance to catch this up-and-coming band live yet, do yourself a favor and look for them to come to your town, as their show is one not to miss. They appeal to young and old alike, as their music is easy on the ears and their lyrics set your mind in motion. Since they have reached near sell-out of their current stock of their CD, Life in Reverie, Slow Children is currently working on re-releasing it with a new look. Then they’ll be hitting the road, once again, planning a five-state, regional tour while entertaining international interest in their music.