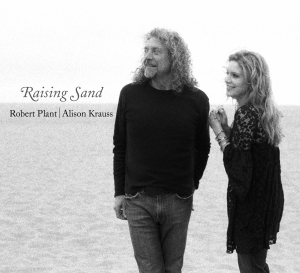 Anchored by two of the most distinctive vocalists in modern music and augmented by the stewardship of acclaimed producer T Bone Burnett, Raising Sand has a sound and theme that flows like one continuous thought -- a conversation between two major music talents that goes on for an entire recording. But Robert Plant and Alison Krauss didn’t set out to make a duet album. Built on a shared core of modal blues and country soul, the album puts the two great singers in a variety of vocal and instrumental combinations – from songs featuring two-part brother-style harmony throughout to solo features for each.

The material, ingeniously chosen by Burnett with input from Plant and Krauss, is the crucial thread that guides Raising Sand and gives the two unique singers a forum to interact and equally express themselves. The songs range from modern to classic, consisting mostly of lesser-known material from a wide spectrum of great blues, R&B, country, and folk songwriters – Tom Waits, Gene Clark, Little Milton Campbell, Mel Tillis, Townes Van Zandt, Doc Watson, Phil and Don Everly among them. They also recorded the Robert Plant/Jimmy Page song “Please Read the Letter,” from the 1998 album Walking Into Clarksdale.

Released in October 2007, Raising Sand has enjoyed unprecedented success. Debuting at #2 on the U.S. albums chart, the album has been certified platinum and has garnered CMA, CMT, and Americana Awards, along with a 2008 Grammy® win for Best Pop Collaboration with Vocals and a nomination for the Mercury Prize's Short List.
At this year’s 51st Grammy® Awards, they took home five Grammys® including top honors for Album and Record of the Year (“Please Read the Letter”). In addition they won for Best Pop Collaboration with Vocals (“Rich Woman”), Best Country Collaboration with Vocals (“Killing the Blues”), and Best Contemporary Folk/Americana Album. Critical praise has been unanimous - “One of the best albums of the year - 5 Stars” raves Mojo, Rolling Stone called the collaboration “skilled and inspired,” and Vanity Fair called Raising Sand simply “a masterpiece.”

Following the album’s release Plant and Krauss embarked on a 55 city worldwide tour that was greeted with widespread acclaim. “Their wide-ranging, two-hour concert here was nothing short of spellbinding,” said the Washington Post, and the Chicago Tribune agreed: “Not one song disappointed.”

In 1966, Robert Plant left his home in West Bromwich, England, left college, left work, and turned professional, and in the following decades has charted a musical path marked both by remarkable success and astonishing creative diversity. From the pioneering work of Led Zeppelin throughout a series of acclaimed solo albums and collaborations, Plant’s wide-ranging appetite has been insatiable, drawing on elements from non-Western music ranging from North Africa to India and beyond, as well as a lifelong fascination with American vernacular music, from blues and rockabilly to psychedelic rock – and most recently to great effect on Raising Sand – roots, bluegrass, and Americana.

Throughout his career with Led Zeppelin and as a solo artist, Plant has sold well over 100 million albums worldwide, and was the recipient of a Grammy® lifetime achievement award in 2005. Plant also received six Grammy® awards for Raising Sand.

Signed to Rounder Records as a 14-year-old fiddler from Champaign, Illinois, she has become the most recognized face
in contemporary bluegrass, a critically acclaimed artist who has brought modern sophistication to the genre while respecting its traditions. She has also sold upwards of 11 million records and garnered 2 Oscar nominations as well as 26 Grammy® Awards, the most for any female artist in Grammy® history.

Also impressive is Krauss’s unwavering commitment to being an independent-label artist – who has succeeded far beyond the scope of many major-label artists. She has circulated freely within pop, mainstream country and roots music circles, as a solo artist and with her long-time band Union Station, creating impeccably produced records that appeal to an equally wide-ranging and inquisitive audience. Krauss has continued doing things the old-fashioned way: following her heart and whatever path the music takes her on.