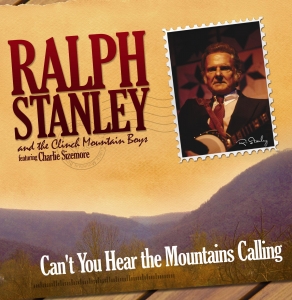 Ralph Stanley and the Clinch Mountain Boys have long since progressed from founding father status to gold standard of lonesome-sounding, mountain-rooted bluegrass music. Even with that achievement and recognition, however, this record, newly-remixed, -remastered, and –resequenced, comes like a mysterious bolt out of the long-ago blue. Originally recorded with modest regional goals for success in 1985, “Can’t You Hear the Mountains Calling” is Ralph Stanley at his most soulful and most vital, with the band accompanying him one of his most definitive and solidly-based. Charlie Sizemore’s understated and haunting lead vocals take center stage, whenever Dr. Ralph Stanley himself or the band’s tasteful instrumental soloists aren’t in the forefront. This is a welcome addition and an instant classic in the Ralph Stanley and the Clinch Mountain Boys great catalogue of timeless bluegrass.

“Who knows why music on a given day happens one way and not another? Maybe the stars align properly, or lightning strikes. I don’t know. I do know that one day in February a generation ago something pretty special happened. I was there. . . and I’m glad I was.”
– Charlie Sizemore


This album was originally released as a cassette in March of 1986 on River Tracks Records, RTS-1097 as Ralph Stanley and the Clinch Moutain Boys "16 Years."

This material was previously released on Copper Creek Records in 1995 as “Ralph Stanley and the Clinch Mtn. Boys” – “Sixteen Years”. The Copper Creek catalog number was CCCD-0138.


"Can't You Hear the Mountains Calling" is one record that can legitimately be said to exemplify "nothing that has ever happened should be regarded as lost for history." Perhaps it could, on a lighter note, be thought of as "the little record, rather than engine, that could," or quite simply as a recording session so memorable it just would not disappear or go away, or at least it just kept on coming back. Originally recorded in 1986 for a casual, regional, cassette-only release for River Tracks Records in Virginia, and entitled "16 Years" back then, this record's life might well have ended with the 500-1000 cassettes the manufacturer intended to sell with no more to be heard of these performances and this music.

Then, nearly ten years later, Copper Creek Records picked up the tapes and reissued them in 1995 to a somewhat broader, but still primarily bluegrass-only audience. Now, over ten years later still, remixed, remastered, resequenced, renamed, and sounding fresher than ever, this haunting and tuneful document is available once more, this time for Rounder Records, whose Ken Irwin recognized the very special appeal of the recording. On it, Ralph Stanley is presented with one of his most enduring and solid sets of Clinch Mountain Boys, featuring Charlie Sizemore on lead vocals, singing timeless harmonies with Ralph throughout.

If this is the little record that quietly insists on deserving our attention, it's because with one listen it's obvious why it deserves to live – again and again. Though the record was originally done as a quick-and-easy one-off to pick up some well-earned extra cash when Ralph Stanley and his hardworking band were between recording contracts, "Can't You Hear the Mountains Calling," originally “16 Years,” is not only much more than a casual throwaway but has wonderful energy, a stripped-down and sparse traditional bluegrass of a variety scarcely to be heard anymore, even back in 1986, at the time of the original session. Dr. Ralph Stanley himself, as leader of the session, is not only in fine voice, but the harmonies possess the suppleness, subtlety, and sensitivity of some of his finest work with his late brother Carter Stanley, as they established the now-trademark Stanley Brothers sound. Here, Ralph's version of the old-time ballad "Little Willie" is right up there with any of his most moving classics. In addition, his banjo has seldom sounded any better or stronger, rhythmic and energetic, yet never overpowering the tune or his lead singer.

And what a lead singer! Over the years, most fans of the Stanley Brothers sound and its uniquely mountain-inflected style of traditional bluegrass have listened to Ralph Stanley recordings and have almost instinctively said, "Who's the Carter?" on this particular record and in this particular configuration of Clinch Mountain Boys, because it is that distinctive a continuity with the original Stanley Brothers sound. There have certainly been many great latter-day Carters over the course of Ralph Stanley's own long career, but arguably Charlie Sizemore is one of the very greatest, for he not only "came up" and "learned" on the Stanley Brothers music, but came from east Kentucky where the Stanleys are bluegrass royalty to this day. One might say he has continued to build upon Carter Stanley’s distinctive vocal approach and style, and, to a large degree, has "perfected" it, taking it to its penultimate conclusion, while still putting his own creative stamp on the style as well.

No doubt there are differences, Carter Stanley and Charlie Sizemore being, of course, two different singers from two different eras, with Carter's untimely death silencing one of the most important and original voices in the history of bluegrass music. Perhaps Charlie Sizemore's leads are subtler and more understated, in their aching and melancholy, where Carter might have gone bolder or more brash. But that said, both the loneliness of the mountains, the nostalgia, as well as a kind of understated elegance and holding back, all combine to make Charlie Sizemore, in many ways, the most potent heir and exponent of the Carter Stanley vocal style.

Ralph Stanley and Charlie Sizemore, from the nearly ten years Charlie Sizemore was a Clinch Mountain Boy, have seldom sounded any better than on this recording -- in their harmony blend and in the complementarity of what each is doing in the session. With Sizemore having long since moved on to form his own band and further refine and develop his own voice, and with Stanley rightfully having settled into enjoyment of his elder statesman status in bluegrass, this version of the Clinch Mountain Boys is indeed history, long past. Fortunately this record affords us a glimpse of some of the finest moments of that band at that time.

Fortunately, we also have Sizemore’s own appreciation of Ralph’s leadership qualities, his instinctive sense of knowing what material will work for him and the Clinch Mountain Boys, and the sprightly way things came together in the studio on that day; that articulation speaks for itself in its own eloquence. Nothing more need be added to this wonderful tribute of the next generation having learned from and gone to school on this founder of bluegrass music itself.

Adam Phillips, a favorite writer of mine, evocatively said, “Memories always have a future in mind;” the music of “Can’t You Hear the Mountains Calling” echoes that very evocativeness and answers the rhetorical question of this record’s title with music that has endured despite itself, not unlike music’s own mysterious sources, whether the agelessness of the Stanley Brothers’ ancestral home or the beauty of the music’s creation.

Another echo from these mountains can be heard in Rebecca Solnit’s words, “The blue of distance comes with time, with the discovery of melancholy, of loss, the texture of longing, of the complexity of the terrain we traverse, and with the years of travel. If sorrow and beauty are all tied up together, then perhaps maturity . . . partially redeems the losses time brings and finds beauty in the faraway.” How is it possible not to be reminded of the miles bluegrass music has travelled, all the while hearing the mountains calling it home?

Ralph Stanley’s approach to making an album doesn’t vary much. First, a rehearsal, usually while on the road, recorded by a small tape player. Here he determines what “works” - which is as hard to define as it is easy for him to recognize.

Many songs never get past this first reading. Consider, for example, a dreadfully sad, lyrically appealing song to which the writer has inexplicably attached a melody more fitting to a fiddle tune. Ralph’s wry verdict: “I don’t think we’re going to record that ‘dancing on Mommy’s grave’ song.”

At the final rehearsal, which may be the first, Ralph writes up the results: who does what, when and where. He uses this to direct the band in the studio with nods here and there when someone forgets what he’s supposed to be doing.

Recording the songs is equally businesslike. Brief – usually no more than one day – and “live,” meaning you hear on his recordings what happens in the studio exactly as it happened. The first take may well be final; no wringing the life out of a song in pursuit of technical perfection. When Ralph declares “that felt pretty good,” more often than not, after hearing the playback a time or maybe two, it’s on to the next song.

“Sixteen Years” is no exception, recorded on one day, mixed and edited the next.

So why does this recording in the minds of many stand as perhaps the best work of this band - an unchanging unit for almost a decade? There is no ready explanation, but if one exists it begins with Ralph.

While not entirely comfortable with the recording process, during the making of this record he almost seems to be having fun. Curly Ray Cline and Jack Cooke, veterans both, are on top of their game. Nevertheless, the configuration of this band is relatively new. Despite the long hours, complacency is not an issue. And if it has any designs on this recording session, Ralph makes short work of thwarting it – not only by example, which is customary, but also with direct, spoken exhortations and admonitions, which is rare. At times he urges the band, in so many words, to stay alert. So part of the answer may lie here.

Or it could matter that Ralph produced and initially released this recording on his own rather than for a record company. Under no deadline and with no one looking over his shoulder, so to speak, he has no one to please but his fans and himself. Perhaps this freedom provides a lack of self-consciousness, at once energizing and relaxing him.

It might be the songs. Some have said the material on this recording is incredibly strong, even by Ralph’s standards. If so, this is by happenstance, not design. With any recording, Ralph tries to put together the best songs he can find. But no doubt there are some great songs here and no recording can be better than its songs.

This sort of analysis is tempting and fun, but also fraught with folly. Who knows why music on a given day happens one way and not another? Maybe the stars align properly or lightening strikes. I don’t know. I do know that one day in February a generation ago something pretty special happened. I was there . . . and I’m glad I was.