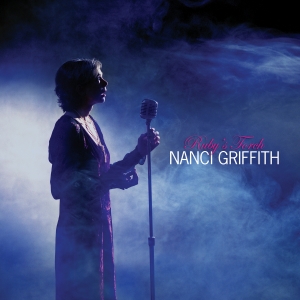 Nanci Griffith got an early start on her path to performing and songwriting. At the age of 6 she began to write songs, thinking of it as “part of the process of learning how to play guitar.” While she doesn’t remember many of her earliest songs, she does recall that “the first original song my mother commented on…was a song about Timothy Leary.” Then at the age of 14, when a campfire turn at the Kerrville Folk Festival caught the ear of singer-songwriter Tom Russell, she was on her way. Having recorded 19 albums and performed concerts all over the world, it’s safe to say that she’s never looked back.
The Loving Kind (available June 9 on Rounder Records) finds Nanci Griffith at the top of her game as a songwriter, interpreter, and singer. Featuring nine songs written by Griffith and her collaborators, and four well-chosen covers, the album takes its place alongside the consistently acclaimed work of this Grammy® Award-winning, genre-defying artist.

When I was first starting out on the adventure of playing and writing music for my living in Texas, I had a larger than life hero. She could take a rowdy bunch of ne’er do wells in a club; who thought they’d come to drink themselves silly…and turn them into puppy dogs in the palm of her hand. She did it with her music. Her name is Dee Moeller. During the past few years, I’d lost something in my heart for writing songs. It took calling Dee for two songs of hers that always haunted me: “Party Girl” and “Tequila After Midnight” to kick start my writer’s pen. Putting myself in my youth and engaging my old friend, Charley Stefl and guitar player, Thomm Jutz, helped me write and get back to that overwhelming strength of her music. Wanting to grow up and be the caliber of writer that Dee Moeller is saved me from my block. This record would never have come to pass without that inspiration. It was a true grace to pass on Dee’s music to my favorite honk and tonk writer, Elizabeth Cook, as she is the next of us.... Thank you, Dee.
I first heard Edwina Hayes at the Sherlock Holmes Pub in Nashville and she was singing my song, “Late Night Grande Hotel.” She had her waitress apron on and hers was a voice of beauty. Little did I know that this voice who sang my closest of songs would write my life so well with her song, “Pour Me a Drink.” Thank you, Edwina.
To all my friends who so graciously lent their voices to the injustice of the execution of Philip Workman on “Not Innocent Enough” and to those who wish for the abolition of the death penalty ~ may we one day get there. Reverend Joe Ingle, Bill Pelke of Journey of Hope, John Terzano with The Justice Project, Sister Helen, Jackson Browne, Congressman John Hall, Steve Earle, Elizabeth Cook, Tim Carroll, Jim Rooney and the ‘voice of God’ on “Not Innocent Enough,” John Prine, thank you for all you do. We have one dream come true... now let’s have another.
To Jim ‘Señor’ McGuire, you’ve now been lookin’ at me for 23 years. That must be a difficult task to suffer. Your photography in music is historic and I am, as always, blessed to work with you. To Richard Wootten...since 1982...you been a-taking care of me in the UK...how in the world do you do it?
To my buddies and co-producers, Thomm Jutz and Patrick McInerney, it’s been a joy and you guys are the lords of music. Thank you, my lords.
My thanks to Robbin Bach and Phil Kaufman for picking up the dropped pieces in my wake, to Burt Stein, all those Rounders, Bobby Cudd, Julie Gold, Dave Ferguson, Matt McKenzie, Heather Smith at Gold Mountain, Todd Snider, Peter Cooper, Richard Dobson, Chet O’Keefe, Barry Walsh, Fats Kaplin, Peter Cronin, Pete and Maura Kennedy, you all amaze me with your talents. Thanks to Tom Gribbin for sending me Gale’s song, “Money Changes Everything” something I could never have written but absolutely love singing...Tom, how did you know I couldn’t write about ‘moolah’?
Finally, long of words here, to the memory of Mildred and Richard Loving. They changed the heart of my nation with their love. May they stand for change in laws of love (there should never be laws of love) for the future. Long live the Loving Kind. Government... Out of who we Love and Out of our bedrooms! To the memory of Odetta: ‘All God’s children needs Vodka’
~ Odetta ~

To my dear friend, John Stewart...heaven is a better place with you in it. And to my ‘beautiful’ pal, my dear stepfather, my Pops, George E. Strawser ~ now up yonder dancin’ with my mother...the world is indeed beautiful thinking of the two of you together again.

For decades, Nanci Griffith has given me things. I figure she gave
them to you, too.

She gave us songs from the pens of Eric Taylor, Lyle Lovett and
Robert Earl Keen, before anyone else that I knew of was offering up
such wondrous things. She gave us images of sad Congress Avenue in
the rain in “So Long Ago,” of friendship both melancholy and
beloved in “There’s A Light Beyond These Woods,” and of a quick
drink in Lafayette in “Workin’ In Corners.” She gave us lullabies
and honky-tonk romps and guitars that rang with melody and rhythmic
precision.

Most of all, she gave us folk songs, but then she stopped doing
that for awhile. The people who loved her songs would sometimes
stop her in the daytime at Brown’s Diner, or at night before she
took the stage, and ask what she’d been writing. And for a few
years there, she would demur. She’d talk about the direction of the
country and of other things that robbed her of inspiration but that
made the rest of us think it was about time for some new Nanci
Griffith songs.

Five years went by, and then I found myself standing outside a
cabin in Mt. Juliet, Tenn. on a winter afternoon. I was there with
Todd Snider, another acolyte, and he was there to sing on “One Of
These Days,” a song we both hold dear, as it was part of Nanci’s
unassailable Last of the True Believers album. We thought it was unassailable, anyway. But Nanci and Blue Moon Orchestra members Pat
McInerney and Thomm Jutz thought they could better the True
Believers version. And they figured Todd could help. And so he did,
once they let us inside. And then Todd and I both joined the chorus
of a song called “Not Innocent Enough,” and it was about then that
it hit us that Nanci Griffith was writing folk songs again.

“Not Innocent Enough” is about Philip Workman, who was killed by
the state of Tennessee. “Up Against The Rain” is about Townes Van
Zandt, who was killed by the state of Townes Van Zandt. “Cotton”
is about Lyndon Johnson. “Still Life” is about George
W. Bush (and, I’m afraid, more about the rest of us than we’ll care
to admit) and “The Loving Kind” is about two improbable people who
changed the world whether or not the world noticed. I think “Sing”
is probably about Nanci Griffith, but I haven’t asked her yet. Even
if she says it’s not, I’ll think it is.

Nanci has a couple of voices, and they are both full of beauty and
truth. She sings in one and writes in another, and on The Loving
Kind we get to hear both voices, at the very same time, in perfect
harmony. That’s a hell of a trick, and Nanci is generous enough to
show us exactly how it’s done.

-Peter Cooper, Nashville, Tennessee
Peter Cooper’s liner note fee was donated to the Massachussetts
Society for the Prevention of Cruelty To Animals.

For more information on Nanci Griffith, check out: