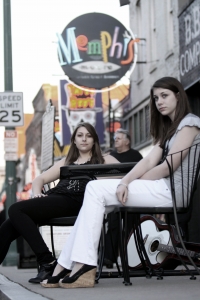 LiLa Young is a new teen pop group formed by sisters, Lizzie and Laura Young. They have literally grown up in a musical family and have been surrounded by musical influence since they were born. Their mother is a pianist, choral director, private vocal instructor and sings mezzo soprano. Their father is a former band director, trombonist and sings bass.

Laura and Lizzie sing in choirs and ensembles at church and school and have both performed with regional honor choirs. Laura plays the piano and acoustic guitar, and Lizzie plays the piano and violin. Laura has competed and earned Superior ratings at the state level on piano. Lizzie has performed with two local youth orchestras, and this past season was concertmaster of her orchestra.

The origin of LiLa Young is an interesting and most unpredictable story. As are most young teens who listen to pop music today, love singing and performing, watching American Idol and Disney stars such as the Jonas Brothers and Selena Gomez, Laura and Lizzie have had their own secret dreams of being pop stars someday. But, short of standing in line with hundreds (or thousands) of other aspiring young artists to vie for a coveted spot on American Idol, or being born into a family of a prominent and widely known performing artist, they were left to their dreams of being pop stars. Or, so you might think…

As providence would have it, the mother of two young singing sisters was referred to the mother of Laura and Lizzie for voice lessons for her daughters. These young ladies had also been singing and performing since they were tiny tots, and had in the last few years recorded two CDs of their own. Their mother was concerned that they might harm their voices over time if they were not using them properly. The voice lessons commenced, much to the disapproval of their father, who has been a vocal performer for most of his life and didn’t need someone else teaching his girls how to sing.

After several weeks of voice lessons, Laura and Lizzie wanted these sisters to know that they were also singers and had prepared to sing something for them before one of their voice lessons. Little did they know that the father was bringing the girls to their lesson on that day. After the lesson, the father noticed that Laura and Lizzie had a guitar and proceeded to ask them if they sang. They told him that they did and that they had planned to sing for his daughters. They did sing for the father and his daughters, which in turn prompted the father to ask Laura and Lizzie if they wrote songs. They replied that they had never written a song, at which point he asked them to write a song and let him hear it the following week.

Much to the surprise of the father and LiLa Young’s parents, a song was written…”Fairytales”. This all occurred in February of 2010 and the rest is history. As of this writing, only six months later, LiLa Young has written and recorded 15 songs. Their first CD will be released in the next month or so and who knows what the future holds for these talented young artists.

Just in case you are wondering about the other sisters, they are still performing and recording under the name of NicholeSamoine. Their father/producer, Al Paris (former lead singer for Kool and the Gang), is also the producer of LiLa Young and is releasing their first CD under his private label recording company, Songbird Records.