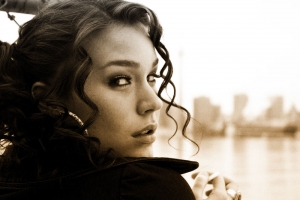 Joss Stone has sold more than 10 million albums worldwide; been nominated for 4 Grammy Awards; appeared onstage with James Brown, The Rolling Stones, Stevie Wonder, Elton John, Patti Labelle, Mavis Staples, Donna Summer, and many many more; sat for an interview with Oprah Winfrey; starred in two major ad campaigns for the Gap; and performed for more than 200,000 people at the 2005 Live 8 Concert in London - all before reaching the ripe old age of 19.

Joss has started her own record label called Stone'd Records, runs her own business and has been named in many artist of the decade lists.
Joss has starred in the Hit show "The Tudors" and will star in new movie filming spring 2011

"Right now my focus is on our new band "Yes Sir Boss" who is on my label" Joss considers the label a safe haven for artists after having a less then enjoyable history with the major labels. "Being free to do my own thing on the business end has inspired me to do more in the creative space, working with a new band who are mates of mine is just so enjoyable!"
Joss has also enjoyed a great partnership with Nine west designing boots for the Fall 2010 American vintage collection, which has sold out. She is now designing her own clothing line that will debut spring 2011.
Joss also stars in the James Bond 007 video game "Blood Stone". She was made into a digital character and also wrote and recorded the theme song for the Game with David Stewart. "Being digitized was totally weird and amazing,” said Stone "the people at Activision are like wizards!" I really enjoyed working with them.

History:
From the time the Devon, England-bred Stone emerged on the music scene at age 16, she has always displayed a strength and intensity, despite insisting that back then, being so young, she didn't know what she was doing. Critics disagreed, calling her a singer who possesses a "rich, deep, soulful belt," as the New York Post put it, and "unlike any singer of her generation." In 2003, Stone released The Soul Sessions, an album of covers of obscure soul tracks, hit the road for a year, then recorded 2004's Mind, Body & Soul, her first album of original material. Of that album, Newsweek noted: "Stone can croon it sad, deep, and throaty, belt it out juke-joint style, or get down and funky for the bump-and-grind crowd," while Interview heralded her "gutsy voice, which can sting like aged bourbon, or melt like strap molasses."

Stone was nominated for three Grammy Awards in 2005, including Best New Artist, and performed a memorable tribute to Janis Joplin with Melissa Etheridge at the ceremony. Their rendition of "Cry Baby"/"Piece of My Heart" was released as a single, and became Stone's first Top 40 hit in the U.S. That performance has been named one of the Grammy's top ten performances of the decade by the Grammy's. That same year, Stone appeared on every American late-night and morning talk show, and scored magazine features everywhere from Rolling Stone to Vanity Fair as well as the cover of fashion bible Elle.

In February 2006, she joined Stevie Wonder, John Legend, and India.Arie for the Super Bowl XL pre-game show, while on the night of the 2006 Grammy Awards, she appeared with Legend and Van Hunt singing a medley of hits by soul star Sly Stone. Their cover of "Family Affair," which appears on the Sly Stone tribute album Different Strokes By Different Folks, has been nominated this year for a Grammy Award for "Best R&B Performance By A Duo or Group." Always game to honor the legends who came before her, Stone brought down the house with her rendition of Dusty Springfield's "Son of a Preacher Man" at the UK Music Hall of Fame Awards in November.
Brian Nelson / Stone'd Records
General Manager
615-509-2166