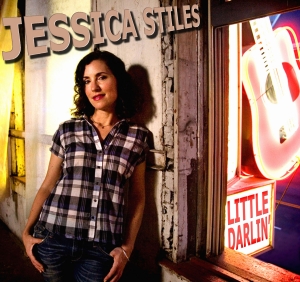 Little Darlin' from Jessica Stiles
Jessica Stiles has announced the digital release of her new five song EP, Little Darlin’, with contributions from Mike Compton, Charlie Cushman, Josh Williams, Shad Cobb, and Kent Blanton. A pair of songs from the album will be made into a 45 RPM vinyl record, to hit later this year, but the digital files are available now in iTunes, and for radio programmers at Airplay Direct.

It’s an interesting mix of styles, with clear elements of bluegrass blended with folk, Americana and old time country music influences. One of them, Answer Him, is her own composition.

Audio samples from the EP can be accessed via iTunes and Airplay Direct.

JESSICA STILES RELEASES NEW BLUEGRASS GOSPEL SINGLE -- 'ANSWER HIM' -- ON iTUNES JUNE 9TH
Available on iTunes and AirPlay Direct starting Monday, June 9th, the first digital single from the four song EP Ms. Stiles has been working on features All-Star pickers Mike Compton, Josh Williams, Charlie Cushman and more. The harmony vocals were put in by the Grascals' Terry Eldredge, along with the one and only "Lonesome" Lester Armistead, who was also a big help behind-the-scenes on the recording project.

Jessica said, "I need to ask Mike Armistead, Lester's son to see whether this might be the last studio cut he got to record. I was honored to call Lester a friend and I will never forget him and all the good visiting we got to do, whether at his old country store (also known as Lester's Loafing Lounge in Goodlettsville, TN), backstage at the Opry or over a nice meal. His friendship cannot be replaced. And neither can his high tenor! We all miss him and I'm just glad I got to know him."

The four-song EP on Troubadee Records will be out later this summer on vinyl, release date to be announced. It has begun to receive airplay on Tennessee radio stations over the weekend - including Knoxville station WDVX.

CMT Blog: May 14, 2010
Situated just behind the Loveless Café on the outskirts of Nashville, the Loveless Barn stands as a simple concert venue with a small stage and an open concrete floor filled with folding chairs. The mood is casual and talkative on most nights, and people move about freely or sit or stand wherever they like. It's the perfect place to host Music City Roots, a live radio broadcast that celebrates the down-home side of country music on 650 AM WSM, home of the Grand Ole Opry. On Wednesday night (May 12), I wondered if the show would go on because that part of town was hit hard by flooding. I was relieved to see that the venue remains intact. I caught one of the last shows of the spring season, featuring Ray Wylie Hubbard, Jim Lauderdale and several guests.

After introductions by WSM personality Bill Cody, the program moved quickly to keep its fans listening from home interested. Hubbard was up first and lived up to his "cosmic cowboy" moniker with a funky four-song set that included "Drunken Poets Dream," co-written by Hayes Carll and nominated in the Americana Music Awards' song of the year category. His dry wit was sharp and loosened up the crowd right away. "I realize this might be the first time that a number of you have appeared before me," he quipped to the still-quiet audience, "so you might be a little bit nervous."

Next up was traditionalist Jessica Stiles, who brought up Dobro master Randy Kohrs for "Tennessee Line," followed by songwriting veteran Dana Cooper playing laid-back songs from his 20th album, The Conjurer.