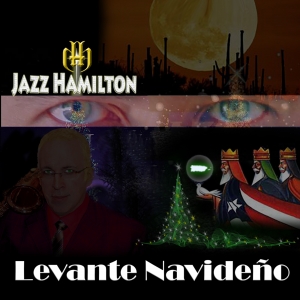 Jazz Hamilton is a Puerto Rican saxophonist, recording artist, musical director, and composer. Known for his recordings on jazz, Latin jazz, contemporary jazz, classical and salsa genres. His main instruments are alto and soprano saxophones, but he also plays tenor and baritone saxophones. Today Mr. Hamilton plays his own brand of professional saxophones The Jazz Hamilton Revolution 65, 100% handcrafted to his specifications  by a selected group of master craftsmen.

Jazz Hamilton was born in Caguas, Puerto Rico, and since the age of 3, he knew he was destined to become a musician. At the age of 4 and 5, he serenaded his neighbors from the balcony of his grandmother 3rd floor apartment, singing the most famous songs of his favorite Salsa artist, Hector Lavoe. His introduction to Jazz was a very unique one, with a father that was an avid collector of good music recordings, he was expose to different genres at an early age. One day he would be listening to great musicians like Charlie Parker, Duke Ellington, John Coltrane and Dexter Gordon, the next day could be Mozart, Beethoven, Tchaikovsky and Glazunov, or Tito Puente, Fania, Carlos Gardel, Tito Rodriguez and Charlie Palmieri,. Then one day he found the original recording of “Body And Soul” by the great Coleman Hawkins, and fell in love with the Saxophone and Jazz Music forever.
Hamilton started his musical formation when he was 11 years old with Professor Pedro Luis Jimenez in Caguas, Puerto Rico. Two years later continued studies in Escuela Libre Antonio Paoli with Jesus Peña and Rafael Lopez Olivo, who recommended him to virtuous Professor Leslie Lopez, for an audition in San Juan. After the audition Leslie took him as one of his very few private students stating, “I want to be a part of this”.
Because Hamilton was a quick learner Professor Leslie Lopez introduced him to the Classical Saxophone repertoire, taking advantage of Hamilton’s personal sound and advanced technique. Later he presented Hamilton to one of his best friends and Master Reedman Lito Peña. Lito became a very influential person keeping in motion Hamilton’s career in music. Giving him personal Master Classes on interpretation, advance technique, musicianship and always pushing the envelope. At the age of 14, he begins his professional career as a musician, with “The Caguas Jazz Workshop”, under the direction of Andres “Maco” Torres, and also featuring Classical Saxophone  Recitals  for the “Instituto De Cultura” in Puerto Rico.
Later in life Jazz went to Connecticut to join the Conservatory of Music, where he concentrated in Music Performance under the wing of Jazz Legend Professor, Jackie Mclean. Late Charlie Parker trumpet player Red Rodney was at the audition and stated to Jackie, “ My God, what a huge sound”. A month later Hamilton joined Red’s quintet.

Formally trained and educated as a classical musician, his main instrument and adventurous spirit took him to explore different paths in the musical spectrum, opening new windows of opportunity to what it has become a very successful  artist and all around representative of the saxophone.  After a long career as a professional musician in the genre of Jazz and Latin Jazz, as the lead Alto Sax player for artists such as El Maestro Tito Puente and Giovanni Hidalgo; as well as performing with internationally well known artists such as Sammy Davis Jr., Hilton Ruiz, Red Rodney and Jose Jose, among others; and after a long career in the Salsa genre as the Musical Director for artists such as Marvin Santiago, Domingo Quiñones and Andy Montañez among others, in 1989 recording artist Jazz Hamilton launched his solo career performing in France, Italy, Germany, Great Britain, Australia, Singapore, Thailand, Japan, Central and South America, The Caribbean, throughout the United States, Canada, and Mexico.
In 1990 he recorded his first solo album in the genre of Jazz titled “Solar Rain”. After the good reception of that album he recorded the albums Fantasy, Love In D Minor and Inolvidable. In 2000 he performed  in  Europe the concert Hamilton y Las Estrellas Del Pueblo, a concept created by Jazz Hamilton to bring the Salsa music to his Jazz audience, which resurrects the Traditional Salsa rhythms and styles of the 1960s, 1970s, 1980s, and early 1990s. Working with original compositions from known composers of these eras, he enriched the harmony of each of the compositions with his own original musical arrangements, while keeping the essence of the thematic written by its original composers.  In 2004 the concept was enhanced and a tour was launched in 2004-2005 to cover Puerto Rico, Latin America and USA.

Hamilton never abandoned his classical formation and has continued performing the classical repertoire. Performances with the Hartford Symphony, Singapore Symphony, Florence Symphony, Ottawa Symphony and  The Perth Symphony to mention a few.

In mid 2005 La Prensa Newspaper an IMPRE Media company selected Jazz Hamilton to be the face of their 25th  anniversary celebrations,  and was hired to perform  and represent  the company in the 7 main markets of the IMPRE Media brand.

In 2008 he delivered a masterpiece with the CD “My Soul” that included Jazz, Classical, Latin and Contemporary Jazz and was featured on the cover and main story of “Latin Beat Magazine” August edition.  LBM editor Rudy Mangual,  entitled the article  “Born To Play Jazz In The Land Of Salsa”. His execution and musicianship in Jazz and the Classical repertoire have been praised by critics such as Paul J Youngman as “Way out there”, “A virtuoso”. Also In 2008 the album Hamilton Y Las Estrellas Del Pueblo Live, was released. The two recordings obtained great reviews from critics in Europe, Canada, United States and Colombia. Reviews by Latin Lady DJ Margarita stated that “If you’ve ever wondered what it would have been like to experience the “Salsa Explosion” first-hand, then wonder no more! Jazz Hamilton y Las Estrellas Del Pueblo, deliver a heavy duty dose of… Salsa Gorda! “Relive” with this cd, as well as their DVD, the heart and soul of what the 70’s in New York were all about… Salsa Clasica!  On this endeavor you will be treated to a collection of well known favorites, as well as some new and original arrangements, along with an amazing list of guest vocalists. The list is truly incredible, the result is simply satisfying!”. Review by Bruce Polin states that ”…you’ll arrive at a kick-butt live salsa explosion featuring an ocean of salsa superstars”.  In 2009 he recorded his first Holiday CD “Smooth Holidays. For the Holiday Season 2011 Jazz produced the CD “Jingle Jazz”. In a radio interview, mastering engineer superstar Bob Kats said; “Saxophonists be aware, this is the way it should be played”

In 2011 Hamilton took a break from long tours  to dedicate  more time to the research, design and development  of his own brand of professional saxophones. After two years of hard work, the Revolution 65 Saxophone was born.  The instrument is having a very welcome reception in the professional field by saxophonists all over the world. During that time he also designed an ebony wood mouthpiece that is hand carved by master craftsmen, especially made for the musician looking to the unique warm, full and organic sound  that only hard wood can offer.

In 2014, Jazz Hamilton released “Within  Jazz And Romance” (Entre Jazz Y Romance) for the AKUSTIK Records.
The recording was considered an explosion of Classical romanticism seasoned with the incomparable twist of Jazz Hamilton sound. Compositions recorded in  Hamilton’s new work includes: Concierto De Aranjuez “adagio” in an amazing arrangement for alto saxophone and orchestra, The Prayer, No Se Tu, Your Sereneness,  The Green Hornet and other original favorites. This musical production embraces the rhythmic interpretation; musicianship; improvisation; phrasing and personal sound all distinctive qualities of the individuality and unique execution of recording artist Jazz Hamilton. His Music, His Life, His Soul… are all expressed Through Jazz Hamilton’s remarkable execution of the Saxophone.

After touring most of the year 2015, Mr. Hamilton went back to the studio and recorded the CD entitled “ADAGIO”. This production was released early 2016 under his newly created independent record label HMER International.  On this album you can listen to the voice of Puerto Rican singer  Lourdes Robles performing classical music for the first time on her career. The organic and warm sound of Jazz Hamilton and the voice of Lourdes Robles merge into a very unique duet where you can appreciate all the subtle nuances and the expressive dynamics of the artists melodic interpretation. On that note, this help you understand why the majority of people say that the saxophone is one of the most romantic musical instrument.

In 2017 he composed, arranged and produced the single Levante Navideño as a holiday season treat. Bringing his refreshing organic sound to the latin music arena once again.
Advertisement