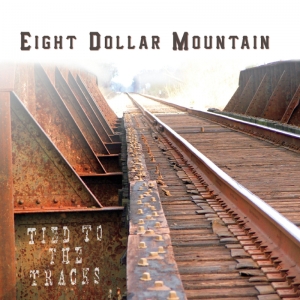 Eight Dollar Mountain Release Vince Herman Produced Album “Tied To The Tracks
"Tied To The Tracks is a fine collection of bluegrass songs that take your ears on an entertaining road trip through America's backwoods, kitchens, and hearts. You'll be glad you went!" - Vince Herman, Leftover Salmon

Eight Dollar Mountain serves up neo-traditional bluegrass blended with rootsy old-time country, blues, and gospel harmonies. Their hard-driving rhythms will pull you onto the dance floor while their clear, purposeful sound reflects the finest traditions of mountain music.

Formed four short years ago on a foggy mountaintop at a bluegrass jam outside of Ashland Oregon, the guys discovered they each shared a similar passion for bluegrass, newgrass and old-timey music. After pickin’ on a few standards, the group’s formation seemed only natural. The blinding-fast flatpicking of Darren Campbell (guitar, vocals), the driving rhythms of Stuart Green (banjo, vocals), the monstrous chop and Monroe-like tones of Phil Johnson (mandolin, vocals), the pulsing low-end of Peter Koelsch (bass, vocals), and the haunting bluesy riffs of Mark Lackey (resonator-guitar, vocals) form the cornerstone of Eight Dollar Mountain’s distinctive sound.

Tied To The Tracks features nine originals and three covers. The album starts off briskly with “These Old Blues”, a song penned by bluegrass legend Larry Sparks, before weaving its way into the easy going licks of “Big Time (Country Dave)” written by fellow Oregon band, Jackstraw. The lonesome and timeless Bluegrass croon of “The Old High Way” and the title song “Tied To The Tracks” both have enough vintage flair, vivid presentation and emotional momentum to be more than your average songs about roads, trains and heartbreak. The instrumental tunes “Old 77” and “Ambush” showcase the energetic picking and impressive instrumentation of the band. Recording in a studio built by the legendary Steve Miller inspired the band to cover Miller’s tune “Fly Like An Eagle”, co-produced by Grammy winning Dennis Dragon, and including a guest banjo track from Leftover Salmon’s Andy Thorn. In the band’s own words, the song is like “Bluegrass tradition hitching a ride on a 70s acid rock school bus.”

In support of their new album, Eight Dollar Mountain will be hitting the summer festival circuit along the West Coast. For more information see: http://www.eightdollarmountain.net
17
What's This
Advertisement