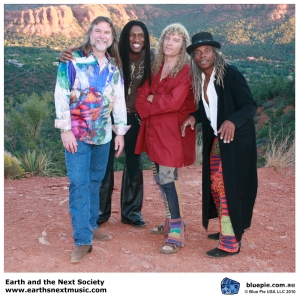 Get grooving with Earth and the Next Society’s single “Where Are We Now”
Earth and the Next Society, a band that sings of current issues in society in an extremely expressive and soulful way release their single “Where Are We Now”. The song has a very chilled out groove that you cannot help but sway along to. With their 1960s hippie attitude, their music speaks of the truth and discusses life in a way that gets you thinking, feeling and dancing. You can imagine yourself moving to this song amongst thousands of other people at a concert outside with everyone holding lighters up in the air, swaying side to side.

Review of Live Earth on Neufutur Magazine
“Golden Age” is the first track on Live Earth, and the confident guitar work that opens up the album will immediately ensnare listeners.

MusicEmissions - Earth and the Next Society - Live Earth
At the heart of their sound is some straight-forward straight-shooting Rock music, complete with everything you'd expect: Harry Burns on bass, Ryan Baker on drums, Tom McMillan on keyboards, and Michael Shields with his soaring guitar solos and heartfelt vocals.