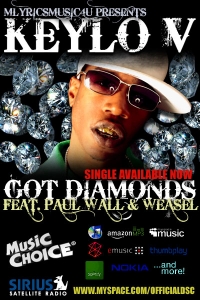 Due to the fact that the people are in need of some real rap/hip hop music, I guess you can consider him the modern day rap version of Robin Hood. Keylo V is here to fill that void and to deliver with a punch! He is the first artist off of his own label DownSouthCommittee, which is now partnered up with MlyricsMusic4u CEO Maurice Carmon Mlyrics. Now if you're asking who is Keylo V or where did he come from, well the Jackson TN born rapper has come from a surrounding of music from old school to new which has molded him to be one of the new elite artist to be watching out for. He has also been putting together an allegiance of hits and features of some of the most hard hitting smashes with some of the best in the business. From Yo Gotti to Paul Wall who is featured on Keylo Vs single "Got Diamonds" with fellow label mate Weasel, his album is going to be something to remember with a guarantee of not being disappointed. His music is a reminder that there are still real rappers out there with no intensions of being a singer. His loyalty to the game is just not the industry but to his people and his people being anyone from the streets as well. His album titled "Get Yo Weight Up" is being called the new script for the everyday hustler/grinder to the 9 to 5 listener that just love hip hop and rap. From club banga to radio smash this southern breaded artist has got it all. Keylo V is on the verge of becoming that new big southern icon, so get yo weight up and keep your eyes and ears open because Keylo V is here and coming to city near you soon.