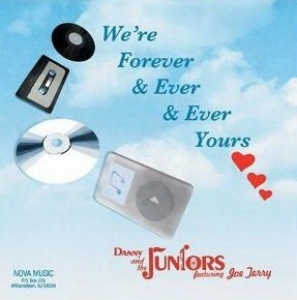 Danny & The Juniors, individually Frank Maffei, Danny Rapp, Joe Terranova and Dave White, began singing together in the early 1950's at ages 13 and 14 in Philadelphia where they were fans of the local rhythm and blues radio stations. It was there they heard the first stirrings of a new music soon to become known as Rock 'N Roll. The Juvenaires, as they were called then, quickly decided to become part of the new movement and began to perform the new songs as well as their own original material at school dances, local clubs and restaurants.

At that time, record companies were engaged in a frenzied search for young people who could perform the new music. It wasn't very long before they discovered the youths, re-named them Danny & The Juniors and recorded them singing one of their own original songs called At The Hop.

The song quickly became a monumental hit on five continents reaching #1 on the pop, country and rhythm and blues charts. It stands today as the #23 all-time biggest record according to The Billboard Magazine List Of #1 Hits. The Group immediately followed with another hit, Rock And Roll Is Here To Stay, which became an anthem of the era, plus dance classics Twistin' USA and Pony Express. These were the first of a string of eleven charted recordings. Their latest albums are the MCA' release Rockin' With Danny And The Juniors, the Collectibles release Danny And The Juniors - Classic Golden Greats, and the Grammy considered children’s CD, For Cool Grandkids Everywhere on the Street Gold label. In the recent past they have had Carolina Beach Music hits Stranger On The Shore and House On Fire, which reached # 1 on the Beach Music charts.

Early in 1958 Dick Clark presented Danny And The Juniors with a gold record for At The Hop on American Bandstand, the first of many awards and accolades they would receive over their career, including Best New Group of 1957, a star on Philadelphia’s Broad Street Walk Of Fame along with the presentation of the prestigious Philadelphia Music Alliance Achievement Award and the New Jersey Legislature’s 50th Anniversary of ‘At The Hop’ award.

With the success of At The Hop, Danny And The Juniors began touring with the other early legends and founders of American Rock In Roll such as: Fats Domino, Chuck Berry, Buddy Holly, Jerry Lee Lewis and The Platters in the famous Alan Freed Big Beat Show, as well as appearing at many of the nations top nightclubs, arenas and fairs. To this day they have traveled millions of miles and entertained millions of people in all fifty states, Canada, Europe, South America and Asia.

Danny And The Juniors have made over 100 American Bandstand appearances and have been on numerous television shows – including The Patti Page Big Record Show, The Pat Boone Show, The Midnight Special, The Sha-Na-Na Show, Solid Gold and Nashville Now. They've also been featured in three motion pictures and their songs have been in many more. Danny And The Juniors have been covered in many important national publications including Life, Billboard, Cashbox and Teen. The latest of these is a recent USA Today article that points out the broad appeal of Danny And The Juniors and their music across many demographic categories.

Now, in their sixth decade as performers, the group still appears at a multitude of venues including conventions, theatres, clubs, casinos, fairs and festivals. Their wholesome, fun-loving stage show is embellished with comedy, impressions, bright costumes and audience participation -- while still preserving the rich history of their music -- and is regarded as one of the best in the business.