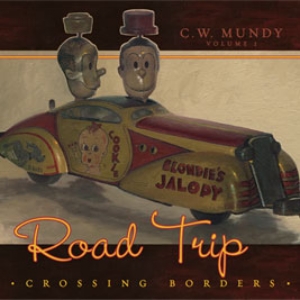 World-renowned painter, C.W. Mundy, is expanding his artistic scope through his debut CD, Road Trip. The 16-track recording of all-original music (and artwork, of course) features Mundy's banjo skills, as well as those in musical composition. It is scheduled to drop August 2nd, 2011, on his newly-created label, Moon Surf Records.

Currently based in Indianapolis, C.W. Mundy is a Master Signature Member of the Oil Painters of America, he holds Master Status with the American Impressionist Society, and regularly sells out artist workshops nationwide. However, this true renaissance man is also a member of the Disco Mountain Boys, a popular Indy-based bluegrass band consisting of other highly-skilled musicians committed to their current professions, yet in need of a musical outlet.

Mundy has a musical background that extends back to his college days at Ball State University in Indiana, where he was a member of a band called American Gothic, specializing in folk and bluegrass music. After graduation in 1969, he headed to California, where he fell into a musical crowd that included such revered names as Byron Berline, Dan Crary, and Pat Cloud. In 1975, Mundy helped form the Tarzan Swing Band, whose unique blend of jazz, country, blues, bluegrass, and swing landed them a house gig at a club in Redondo Beach, took them on the road, and nearly got them signed to MCA. The band broke up before the opportunity could manifest following the death of the band’s fiddle player, who lost her battle with Hodgkin’s disease. Other musical offers came his way throughout this time, including one from Linda Ronstadt, but ultimately, CW Mundy moved back to Indiana in 1978 and shifted his focus to art, where it has primarily stayed for the past 30 years.

“Road Trip has been a dream of mine for the past 10 years,” CW enthusiastically explains of the multi-genre CD, which truly is the culmination of his vast musical experiences and influences, ranging from jazz and blues to bluegrass to what can possibly be described as lite island techno. “My life is wrapped around creativity. I’m not happy unless I’m creating.”

Recorded at Digital Underground Studio, a facility in Greenbriar, TN, belonging to long-time friend and revered banjo player, Scott Vestal, Mundy knew he was the perfect choice to help make that dream a reality. Bringing in some of Nashville’s most prominent musicians, including Randy Kohrs on resonator guitar, lap steel, and vocals, Chris Brown on percussion, Jim Van Cleve on fiddle, and Alice Vestal on lead and harmony vocals, to name just a few, the CD is exactly that: a dream come true.
12
What's This
Advertisement