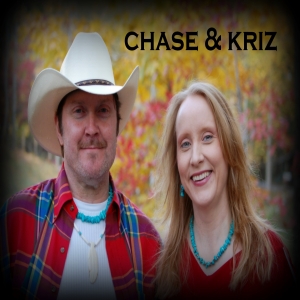 Chase Rogers was born the grandson of an evangelist in the foothills of the northwest Georgia mountains, USA where he began singing in church at age 6.
Kriz Rogers was born and raised on the east coast of Sweden where she started singing in Sunday school when she was 6 years old as well. Music and singing have always been a large part of their lives.

Chase & Kriz fell in love with each other in November 2008, got married in April 2009 in Ringgold, Georgia and now reside in Nashville. Tennessee. The foundation they are leaning on musically is the heritage of the country stars of the 60s & 70s like Conway and Loretta, George and Tammy and Johnny and June, however, both singers have developed their own unique style.

Kriz Rogers has written 290+ songs of which she has recorded seventeen which are released on the two cds “Kriztinacountry” and “Roads” under the name Kriztina Ahs & Countryfied. She also has a single release -"Memoryville" on Colt Records. Her melodies have influences from Hank Williams Sr., The Bakersfield sound Buck Owens, Merle Haggard), Lefty Frizzell, George Jones and Loretta Lynn, but her lyrics are most often from personal experiences. Of today’s country stars Brad Paisley and Miranda Lambert are two of her favorites.

Chase Rogers has recorded three of his songs: “Livin’ Right”, “Softer Side Of Me” and “Drop Hook And Run” which were on a fourteen song cd titled “She’s My Friend”. Some of his biggest influences are Tracy Lawrence, Mark Chesnutt, Randy Travis, Alan Jackson, Travis Tritt, Doug Stone, Joe Diffie and George Strait.

Chase was awarded the title of Traditional Country Male Artist for 2008 by the International Country Music Association. He has performed at various venues in the southeastern parts of the USA and appeared on television and radio shows in the States. Kriz has toured, been on tv and radio shows and topped radio charts in Sweden and Europe. Her “Singing My Blues Away” climbed to spot 15 on European Country Music Association’s radio chart summer 2009. Chase & Kriz Rogers are performing in the USA and Sweden and their songs are played on radio all over the world.