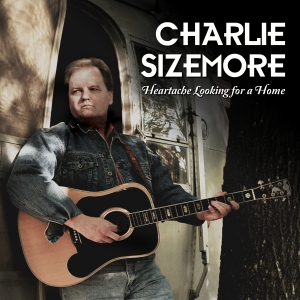 When the Hollywood legend spoke that line to Doris Day in 1958’s Teacher’s Pet, he was playing a crusty newspaper editor describing how he cut stories to barest essentials.

Their statements may seem diametrically opposed, but he and Charlie Sizemore are in full accord. Like those old-school newsmen, every word counts to the singer/songwriter/guitarist, and he chooses them with painstaking care, whether putting his own lyrics to paper or picking material for a new album. That’s why some call him “The Song Man.”

“If I can sing the song and feel legitimate doing it, that’s all I need,” he explains. “I know when it’s right and I know when I feel like singing it. That’s the measuring stick for me.

I don’t know why, but I can sing a song - not just listen to a song, I have to sing it -- and when I sing it, I know whether or not that song works for me. And if it does not, I’ll feel phony. I will not feel right.”

That process resulted in his acclaimed 2007 Rounder debut, Good News, as well as his previous album, a tribute to one of country and bluegrass’ all-time greatest songwriters, The Story is…The Songs of Tom T. Hall (2002).
And that’s how he and The Charlie Sizemore Band came up with the 14 songs on Heartache, including originals by resonator guitarist Matt DeSpain (“Fords of Pittman”) and bassist John Pennell (“Feelin’ Like El Paso”), one of Nashville’s most respected songwriters.

In 1977, I got to know Charlie Sizemore the way most bluegrass fans outside his Eastern Kentucky Magoffin County home did, as the skinny 16-year-old who replaced Keith Whitley in The Clinch Mountain Boys. A big enough hat to fill, but there was also Keith’s predecessor, the late Roy Lee Centers, a man who could out-Carter Carter. It was bluegrass boot camp, but “the kid” earned his place in The Clinch Mountain Boys, spending an unprecedented nine years as Dr. Ralph’s lead singer, a role he never really wanted. He’d come to audition for lead guitarist, but Junior Blankenship won that gig a few days earlier. Charlie still plays lead on occasion and you can hear his fluid guitar on “Fords of Pittman,” but he remains as self-effacing about that as most everything else.

Bluegrass is a music of experience, and like a vintage Martin, Charlie has gotten better with age, the heartache in his voice growing deeper and more resonant. Like Carter, Charlie’s singing wields a lonesomeness that’s all the more powerful for being so understated.

By 1986, when he left The Clinch Mountain Boys, Charlie had spent more than a third of his life in bluegrass’ most traditional band. So it’s no wonder his music carries that Stanley DNA, even on mainstream country like “I Don’t Remember Loving You” or the comic “No Lawyers in Heaven.” And when he reunites with Dr. Ralph for “Red Wicked Wine,” it’s a Clinch Mountain flashback.

All those years and miles on the bus also left Charlie with an insatiable restlessness. He’s happiest in transit, whether to bluegrass festivals with his Charlie Sizemore Band or driving between his Eastern Kentucky home and Nashville, where he keeps an office for his music business and law practice (another side effect of his love of words) and where he frequently comes just to spend time with kindred spirits like Tom T. and Dixie Hall.

You can hear all that on Heartache, even though he wrote none of the 14 songs. There’s a common thread of restlessness, of yearning, in the material chosen so carefully. The people in these songs are all seeking comfort, some momentary peace, in a lover’s arms in “Down in the Quarter,” in a glass of “Red Wicked Wine” or in fantasies of unobtainable women – in the movies (“Ashley Judd”) or the apartment upstairs (“Walking the Floor Over Me.”). And while this isn’t a concept album, our restless soul finds peace at last, closing with “Crossing Over Into the Valley,” a love song of homecoming to the Shenandoah Valley: “Sweet sanctuary, welcome me in.”

That’s one of five songs by master songwriter Paul Craft, whose catalog includes “Midnight Flyer,” “Keep Me From Blowing Away,” and “Through the Bottom of the Glass.”

Charlie earned his law degree after leaving The Clinch Mountain Boys, which gives extra edge to Craft’s “No Lawyers in Heaven.” After all, who hates lawyers more than other lawyers? Craft’s “Heartache Looking for a Home” was recorded by The Osborne Brothers, but Charlie had a different idea. “What would that song sound like if Jimmy Martin had cut it?” Since Jimmy was unavailable, here’s Charlie’s hard-driving, Martin-ized version. “Slow Goin’” is Craft’s co-write with the omni-talented Shawn Camp, and one of the most instantly memorable tracks here.

Charlie had Craft’s “Ashley Judd” when he recorded Good News, but with that CD’s “Alison’s Band,” Ashley was one woman too many, even though she attended UK the same time Charlie did (no, they didn’t date). “Contrary to these songs, I do not sit around and lament about what I don’t have, be it women, or jobs in bands, or anything else. I feel pretty fortunate. There’s a lot of women I don’t have, and that universe is rapidly increasing, a conscious effort on my part,” the happily unencumbered Charlie says drily.

Another songwriter worthy of a full-album tribute is Charlie’s cousin and fellow Eastern Kentuckian John Preston (“Red Wicked Wine”), best-known for “I’ve Just Seen the Rock of Ages.” Preston was in demand as a songwriter in the ’70s, but preferred crime, mostly petty theft. “He’s probably spent about 60 years in prison. He never went to sixth grade, but he can write a legal brief that puts most lawyers to shame. He never could follow through with anything, though, ’cause he always knew he was going to the pen.”

Charlie recorded “Red Wicked Wine” in The Clinch Mountain Boys but it was never re-issued. He wanted to re-cut it, “but it just didn’t sound right to me not having Ralph sing it. So I just asked if he would do it and he did. And he didn’t charge me anything, so I can’t argue with that.” It gets extra Stanley punch from Ron Stewart’s “Man of Constant Sorrow”-style fiddling.

“Walking The Floor Over Me” is by obscure Nashville singer-songwriter Alan Jackson. “I heard that on a bluegrass record by Rick Bartley. John (Pennell) brought it to me. When he told me the title I said, ‘No, that won’t work. It’s too cute, it’s too clever. But when I heard the song I said, ‘By god, they pulled it off.” And then I saw who wrote it. I said, ‘Yeah, he would be able to pull that off.’

“I Don’t Remember Loving You” was a 1982 Top 10 country hit for John Conlee. Charlie had wanted to cut it for a few years when Rounder’s Ken Irwin suggested it. “Great minds think alike. It’s one of my favorites. I didn’t do too much to it. It’s just a great song.”

Tom T. Hall describes his “Pay No Attention to Alice” as “Two drunks sitting around, talking about another one.” “Yeah, that’s the twist in it,” Charlie says. “Alice has a problem, but these guys really have a problem, they just don’t know it.”

Charlie’s joined by the four like-minded musicians in The Charlie Sizemore Band – banjo player Josh McMurray, resonator guitarist Matt DeSpain, mandolinist Danny Barnes and bassist John Pennell. There’s no flash-for-flash-sake. All play with the same restrained soulfulness that’s a Sizemore trademark. Even as he reaches beyond bluegrass for material, his Charlie Sizemore Band remains firmly rooted in the sound he was raised on. “It could be my years with Ralph, but I’ve never thought of myself as anything but a traditional bluegrass band.”

For that old-time sound, mandolinist Barnes sings and plays clawhammer banjo on “Poor Rambler,” a Stanley variant on Dock Boggs’ “Country Blues.” Also from the Stanley canon, everybody lets ‘er rip on “Going to Georgia.”

Heartache covers lots of ground, musically and geographically, which suits Charlie just fine. “I don’t want to make the record I made previously. I just try to keep it interesting for me.”

That’s a lesson learned during his self-imposed 8-year exile from bluegrass, prompting his 2006 return. “I remember the first year I didn’t have anywhere to go. That was the strangest feeling. I ‘m going to my office and I’m coming home -- I’m not going anywhere. I like being on the road”

Merle Haggard diagnosed it as Rambling Fever. But as long as Charlie’s condition includes symptoms like Heartache, we can only hope it’s incurable.