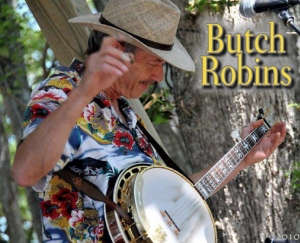 Butch Robins Releases New Banjo Single!
The legendary banjo master, Butch Robins, has just released an exciting new banjo tune he's titled "Butch's Meltdown". As he explains, "Some people have breakdowns, but I have meltdowns!" Played on his 1930 Gibson RB-4, this tune & several more were written by Butch several years ago and recorded in studio but never released. Recently discovered in a box of old recordings, "Butch's Meltdown" is now available for all to hear and enjoy!

Butch Robins to Release New CD, "DREAM" ~
The wait is nearly over!

Legendary banjo virtuoso, Joseph C "Butch" Robins, has completed a new CD, entitled "DREAM". After working as a sideman for the Father of Blue Grass Music, Bill Monroe, Rock & Roll Hall of Fame member, Leon Russell and big-band leader, Harry
James, Butch’s musical influences are diverse and significant. His new CD reflects
these influences with a unique sound that can’t be pigeon-holed into any specific genre,
other than "wonderful music". Grinning, toe-tapping and head-bobbing may be perfect
descriptions of a listener’s reaction to the music. Creative melodies and lyrics (sung by
Butch, himself) range from ethereal to funky, while flowing seamlessly from one to the next. The ensemble, consisting of banjo, bass, keyboards & percussion creates a "wall of sound" with a perfect blend of individual instruments, although each is easily
discernible and allows the listener to appreciate the undeniable proficiency of the musicians. Repeated listening to the songs/tunes yields new and previously unheard nuances in each arrangement, showcasing Butch’s masterful musicianship and creativity.

The CD release date is yet to be determined - keep your eyes and ears open. Butch Robins is a musical artist whose time has come!