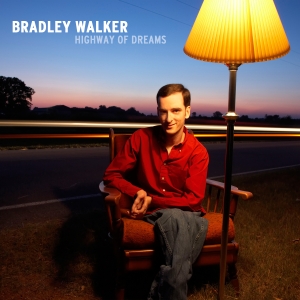 Before he got his recording contract, Bradley Walker had already performed on the Grand Ole Opry, appeared on national television and sung at some of America’s leading bluegrass festivals. One listen to Highway of Dreams, his stunning Rounder Records debut, explains why: Bradley Walker is simply one of the greatest young country singers alive. He belongs to a tradition that includes such outstanding stylists as Vern Gosdin, Merle Haggard, Mel Street, Gene Watson, George Jones, Lefty Frizzell, and Keith Whitley, all of whom he cites as influences. “It’s not like I’m on any kind of campaign to bring back traditional country music,” says Walker. “It’s just that this is the kind of music I love, the kind of music that makes me happiest. I’ve been singing this way all my life.”

Backed by some of Music City’s greatest acoustic players, under the direction of producer, singer, multi-instrumentalist and songwriter Carl Jackson, Walker turns in one breath-taking performance after another on what is easily the finest country-bluegrass disc debut of the year. The message song “A Little Change,” alone, is enough to alert you that you’re in the presence of a master vocalist. The twin-fiddle waltz “He Carried Her Memory” is utterly heartbreaking, while the yearning “Lost At Sea,” the classic-sounding weeper “Love’s Tombstone,” the bluegrass rampage “I Shoulda Took That Train,” and the moving gospel outing “We Know Where He Is” are so assured, so emotionally complex and beautifully phrased, that they sound as if they come from a seasoned veteran rather than a newcomer. Walker's soulful, mature style was immediately embraced by the bluegrass community, and he was named Male Vocalist of the Year at the 2007 International Bluegrass Music Association awards -- a rare feat for an emerging artist.

“He really is one amazing singer,” says producer Jackson, who has worked with everyone from Emmylou Harris to Glen Campbell. The GrammyTM award-winning Jackson’s resume includes sessions with Ricky Skaggs, Jim & Jesse, Garth Brooks, Vince Gill and many other greats. But he reserves extra praise for this new stylist. “Bradley is a special person, as well as a talent,” Jackson continues.

There are so many people who've played a part in the making of this project, where do I begin? To Ken Irwin and everyone at Rounder, thank you for giving me a chance and for believing in me enough to make this dream a reality. To my producer and dear friend, Carl Jackson, words could never express my appreciation for all your hard work, the long hours, and your amazing talent for making this record something we can both be so very proud of. You've made my job so easy, and your friendship alone means the world to me. Love ya, buddy! To Luke, Hip-Hop, and everyone at Station West, y'all are the best! Thanks Luke for working so hard through a rough time…you are the man! To the songwriters, thank you for songs with a message and a meaning. Thanks to all my friends – Clay, Carl, Tony, Kevin, Adam, Ron B., Rob, Randy, Ron S., Jimmy, Andy, and Aubrey, for adding your own unique sound to this record. To Alecia, Carl, Rhonda, Cord, Brandon, Russell, Jerry, Sonya, Cia, and Vince – thanks a million – it is such an honor to sing with all of you. To Ann Taormina, thanks for pushing "Stars" – I owe you! To Brandon, Ann, and Alecia, thanks for a friendship that's always seemed more like family from day one. Love ya! A special thank you to Darrel and Phyllis Adkins and Lynn and Brenda Butler – y'all have been a big part of this project from the very beginning. Thanks for your continuous support, the all-night jams, and your special friendship – love y'all! A big thanks to my co-workers at Browns Ferry for standing behind me and picking up the slack so that I could have this opportunity. Thanks especially to Mama and Putt, Aunt Carolyn, Daddy and Susan, and my entire family for always being there. Your strong support and encouragement is what's brought me this far, and you'll never know how much I love you. Most importantly, thanks to the Good Lord for more blessings than I've ever deserved, and for Your gift of music. May You always be the one leading me down this Highway of Dreams.