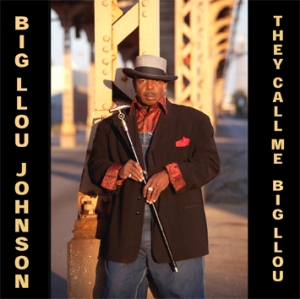 You can hear his deep bass voice on XM Sirius Satellite Radio as he announces for the B.B. King Bluesville radio network. And now you can hear that same outstanding personality as he expresses the blues on his debut CD, They Call Me Big LLou . Big Llou Johnson is a man’s man with a vocal presence that is commanding without being harsh. And yet his voice resonates over you, soothing and velvety; it’s the kind of voice that’s hypnotic and makes women want to melt.

Big Llou, a native of Chicago who hails from the West Side, put together a select group of songs that features not only some wonderful blues standards such as “Help Me” and “Rock Me Baby, but includes some funk, R&B, and a touch of contemporary jazz, along with an original written by Johnson, “They Call Me Big Llou”. And Big Llou can’t help himself. He’s just out-and-out sexy and he knows it, thus his decision to put his vocal skills to use on this debut CD. With a degree in Broadcast Communications from Chicago’s Columbia College and experience as a live event personality, along with film and theater acting, it was natural for him to add quips throughout, with a chuckle here and there. It takes the CD to a whole different level, making him endearing, approachable, fun and yes, so sexy.

Russ Green, the producer of Johnson’s self-titled CD, is also a very talented harp player as evidenced on the cuts he performs on. He plays behind Big Llou, not over him, with some tasty fills and solos. Green’s musical history is impressive; he’s toured Europe, performing at prominent blues fests in England, Scotland, Chicago and San Francisco, earning positive reviews and gaining attention. With his producer hat on, Green picked the band members to play on this project featuring accomplished Chicago musicians. There’s Mike Wheeler on guitar (who also plays with Big James & The Chicago Playboys and with Peaches Staten) who is a headliner in his own right. Bassist Ricky Nelson is a versatile musician who also played drums for Koko Taylor and Big Time Sarah, along with bass for the late guitarist Chico Banks and more. Ronnie Hicks is on keys; he backs numerous blues artists such as Cicero Blake, Nellie “Tiger” Travis, Artie White and the list goes on. Dejuan Austin is on drums and also plays with Ronnie Hicks in Masheen Company. Charles Pryor on trumpet is a musician of choice, evidenced by his many appearances on festivals and club stages.

“They Call Me Big Llou” is Silky, Sultry Blues / Amer. Blues Scene
They call him Big Llou, the well-known voice of the “Ten Commandments of the Blues” on B.B. King’s Bluesville, because he weights 300 pounds — and he wants the world to know it. Sporting an instantly recognizable, famously baritone voice and, for those that have seen him in person, a powerful build and an endlessly stylistic appeal, Big Llou has recently released his first solo album, They Call me Big Llou. The album grooves along funk, traditional Chicago blues, and some slow, slutry numbers as Llou graces the wax with his smooth-as-silk vocals.

The tracks are a diverse musical showcase with consistent themes of love, sex, and blues. The album starts off with “They Call Me Big Llou”, a Chicago blues styled staple, prominently featuring Llou’s trademark voice as he woos a woman. “Dogg” features a more funk-driven, soul style, while “Flesh and Blood” is a sultry slow jam about a burning love. As sexy as the tracks are on the album, it’s no surprise that Llou expertly covers Barry White’s “Your Sweetness is my Weakness,” complete with inviting backup vocals.

Living Blues Review
Most readers of these pages will know Big Llou Johnson’s voice as the between-song tour guide of sorts through the streets of Sirius/XM Radio B.B. King’s Bluesville. In addition to a career as voice-over artist extraordinaire, actor, and commercial jingle man, Johnson puts his pipes to use diggin’ into the blues. He’s released his debut disc—They Call Me Big Llou—on his own Goldenvoice label. Coming up on Chicago’s West Side, cutting his teeth in the Baptist church choir, Johnson didn’t lack for exposure to soul power, and it comes through on the album. Johnson projects a vibe time-tested by the sensual lowdown rumble of Barry White, and the suggestive lights-down-low player pose of Teddy Pendergrass, with classic Motown polish. Produced by Johnson and Chicago musician Russ Green (who provides harmonica throughout), the album features an A-list of Chicago blues musicians. Mike Wheeler, who’s played and recorded with everyone from Koko Taylor to Big James and the Chicago Playboys, lends a distinctly West Side twang a la Eddie C. Campbell.

Pat St. John / DJ - BB KING’S BLUESVILLE
What a voice on this man and what a groove he’s got going! A great new CD. Not since Barry White. Just fabulous, the ladies will really go nuts!

Earl Thomas - SINGER/SONGWRITER
I’m so honored you chose my song and thank you for doing such a GREAT JOB with it! Loving the background vocals, the harmonica is fierce, guitar is killing - the piano is right on the money and your VOICE is incredible! You bring my lyrics to life. Bravo Big LLou, bravo!

Jennifer Wheeler - CHICAGO BLUES GUIDE
Never heard a soul voice especially one as deep and rich as Big LLou’s combined with blues music. This album is truly as unique as his voice. I love it!