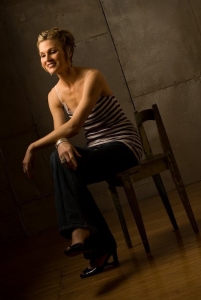 Today's Country Magazine
Becky Schlegel attracted a huge amount of attention with the release of her last studio album For All The World To See. She drew comparisons to the likes of Alison Krauss and many of the reviews coming back focused on her ability to deliver her songs with an angelic like tone. That is exactly what Schlegel has done with her brand new single “So Embarrassing” as well. The song’s lyrics are so real and truthful that you feel them as you listen to her sing about being deceived by the one that you love. An added bonus to the song is the appearance of Randy Kohrs providing the outstanding backup harmonies that helped to accent Schlegel’s incredible, unique voice. This single is an early preview of things to come with her 2010 release DANDELION, and if it is a solid indication of what else the album will hold for listeners than I suspect the critical acclaim to keep following Schlegel as she forges forward into the next stage of her career. Although there is a sense of growth and new heights reached with this song, Schlegel mostly seems to stick to what she does best and just keeps delivering it as she does with “So Embarassing.”

Jon Bream, Minneapolis Star Tribune
Her appearances on "A Prairie Home Companion" and her new Nashville-distributed For All the World to See suggest that this sweet-voiced songbird has the most commercial potential of any female Minnesota country singer.

Lizza Connor Bowen, Performing Songwriter
There are some voices that, when lifted in song, are so sweet, even the alphabet—sung backward and in German—would tantalize the ear. Bluegrass artist Becky Schlegel, with her new release For All the World to See, is one of the gifted, honey-throated songbirds like Dolly Parton and Lee Ann Womack who sounds effortless when she delivers a tune. With a lovely soprano that complements her brand of old-time roots music, Schlegel offers 11 originals penned from a deep well. Fans of honest Americana and acoustic-country acts like the Dixie Chicks and Lori McKenna, or even stripped-down pop á la Jewel, should give Schlegel’s CD a listen.

George Peden, Country Stars Online
What a deeply satisfying album For All The World To See is from Becky Schlegel. The voice, the songs, the artistry of the musicians, all adds to an album that, simply, is clear, melodic and easy on the senses…Misery never sounded better, as Becky Schlegel sings of betrayal and abandonment. The finery of her songs comes wrapped in a bluegrass mode that is delightfully musical, keenly expressive and emotionally revealing; now, if country radio moves beyond its imposed safety of predictable formats, soon it could be, as her album suggests, for all the world to see.

C.J. Trent, The Celebrity Cafe
Her unique style is tempered by sentimental lyrics sung with an earnestness that is refreshing. Recalling the style of Jewel, Schlegel’s vocals brighten up this album and each carefully-crafted track.
Becky Schlegel’s For All the World to See is a memorable album, one that should quickly rise, making Schlegel the well-known artist she should be. With a distinct genuineness about her vocals, Schlegel’s heart is in her song, and her band acts as the support she needs to reach one of the highest planes of musicality.