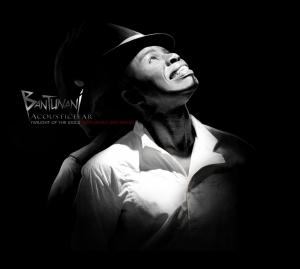 More than music, Bantunani is primarily an adventure, the will of a person to continually unite around her musicians from all walks of life to draw a sound, thought, and a groove nomadic that caresses the ages languages and styles. It rubs happy soul, funk, R & B and Afrobeat in a world where the guitars are expressed between joy and arrogance behind hushed vocals. Every second, rumba home can break. Listen Bantunani implies a freedom, a total lack of boundaries and a love of music colorful human humanist message.

Behind the pen vindictive, melancholy, hides the eyes of Michel Nzau, instigator of the afrogroove, it is the project multiethnic whose essence remains except the sound live. There are few artists whose music, indefinable and sensuously African, invites you to dance, and reflection at the meeting. His productions are full of mixtures and express the inheritance of a music lover looking for innovative groove. Far from the shackles, sweat daring.

Designed in 2006 as a creative platform around the guitars, musicians and multimedia artists and other engineers of sound, Bantunani is one of those constellations which revolve wills in the service of creative art that the structure is seen to change with each project .. Each new album evokes a new life with new faces of musicians who come together when the hard core push the boundaries of the so-called afrogroove.

As a long journey, Michael has created around a core group of quality musicians, both guarantors of writing and freedom

is found when Michel at the helm, Niwa Koshi, bassist Japanese because of its Thurs dark rock with hints soukouss just sit singing and guitar Nicolas Mazzola, the Sicilian mandolin pop and arpeggios. It collects guitars and guitar rifts effective than the rhythm of Bogdan asseoit quietly as a jazzman. In this mix sound, the sweet sensuality of the female vocals, warm and seductive surprises and attracts the timbre folk rocker Barbara Salt uses it alongside many guests.

Group name:
The name of the group Bantunani would have three meaningsperformed well in the group's philosophy, the first sense comes from the Lingala (language spoken in Congo-DRC), which means Bantu the 'Bantu people' and would return the question tois this people?, the second meaning is more of a universalist because it refers to the notion of Bantu as a human being, hence the question who are we?
Finally, the last sense, the Bantu word also means 'people' so we have the question, who are these people? In this case is this group Bantunani.

Discography:
May 2010: Africanization
The return was expected to confirm the first flush, marked by the opening in all directions, this album exceeds the nu-rumba to finally establish the afrogroove where ranges of styles styles, from theme to theme but always with a strong will not to dance silly. There are the hits 'Coltanrush' Letthemtalk and other Balckninja. (Ruestendhal / Believe)

March 2008: RumbaLounge, Discovering NuRumba
first album, marked by a groove very wild, he laid the foundation for the nu-rumba. The African universe, text rich and effective melodies made this album a first success with titles like Bantugroove, and Rumbafever Makambo. (Ruestendhal / Believe)
3
What's This
Advertisement