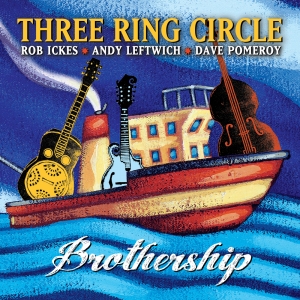 About Three Ring Circle: Acclaimed instrumentalists Rob Ickes, Andy Leftwich, and Dave Pomeroy joined together as Three Ring Circle to pursue a common goal - creating innovative and memorable music with the unique combination of dobro, mandolin, and electric upright bass. They are individually renowned as world class players known for expanding the vocabulary and boundaries of their chosen instruments, and the trio format allows them unprecedented creative freedom and stylistic versatility. Their debut album, a self-titled CD released by Earwave, included 7 originals written by all three members and creative reworkings of tunes by Stevie Wonder, Jeff Beck and Bireli Lagrene.

Guitar Player Magazine says this about the Brotherhood CD: "The TRC boys are back, doing what they do best: raising the bar to dizzying heights in their bluegrass-meets-rock-meets-jazz world. They do it with tone, taste, and absolutely unbelievable chops. Andy Leftwich’s mandolin playing is flawless, Dave Pomeroy’s bass is warm and round, and Rob Ickes is Rob Ickes—a first-ballot Dobro hall of famer.

About Rob Ickes: Originally from the San Francisco area, Rob has become known as one of the finest dobro players on the scene since moving to Nashville in 1992. A founding member of the Grammy nominated bluegrass band Blue Highway, he has been named the International Bluegrass Music Association's "Dobro Player Of The Year" twelve times. He was chosen as the USA Cummings Fellow in 2010, one of the $50,000 fellowships awarded by United States Artists each year to 50 of America’s finest artists across eight disciplines. He has recorded 5 groundbreaking solo albums (Road Song, ResoRevolution 2009; and three earlier releases on Rounder Records). His session work includes work with Patty Loveless, Earl Scruggs, and Alison Krauss, and he is a featured artist on the Grammy winning "Great Dobro Sessions". He and Dave Pomeroy are featured artists on the critically acclaimed CD " Nashville Acoustic Sessions" with Raul Malo and Pat Flynn.

About Andy Leftwich: Andy is only 29 years old, but he is already one of the most accomplished mandolin and fiddle players to appear on the scene in a long time. Andy's blazing mandolin break on "Shady Grove" from Ricky and Kentucky Thunder's Grammy winning "History of the Future" served notice that not only were Andy's fiddle skills extraordinary, but that his mandolin playing was a force to be reckoned with. His debut CD "Ride" on Skaggs Family Records charted high in the bluegrass charts and brought more attention to his prodigious composing and production skills. Andy's evocative, challenging tunes and complex, driving mandolin style are an essential part of the trio's sound.

About Dave Pomeroy: The distinctive sound of Dave's electric upright bass has been heard on over 500 albums and six Grammy winning CDs with artists such as Emmylou Harris, The Chieftains, Elton John, Earl Scruggs and Alison Krauss. He has performed live with dozens of major artists including Duane Eddy, John Fogerty, Steve Winwood, and Mose Allison. He has been voted "Studio Musician of The Year" and "Bassist of The Year" at the Nashville Music Awards. He has released 7 albums on Earwave Records, including his solo CDs "Basses Loaded" and "Tomorrow Never Knows." Dave's bass is the backbone of the trio and his versatile rhythmic and melodic playing helps push the music in new directions.
20
What's This
Advertisement